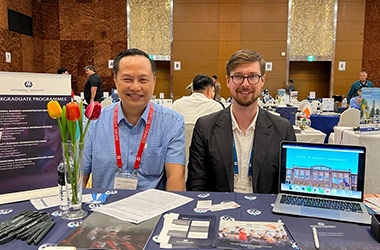 Unnuanced motions on irresponsible recruiting to affect students and institutions

At the end of last month, the Dutch Tweede Kamer (House of Representatives) passed a motion requesting that the groups ‘Vereniging Hogescholen’ (Association of Universities of Applied Sciences) and ‘Universiteiten van Nederland’ (Universities of the Netherlands - UNL) stop actively recruiting international students and create legislation limiting intake. This was to be expected, as the government expressed the intent to limit the intake of international students earlier in November.

Each year, many Dutch universities of applied sciences and research universities attend the countless education fairs taking place around the world, like ICEF, which Wittenborg University of Applied Sciences (WUAS) attended this year in Barcelona as well as Berlin. If the parliament were to have it their way, state-funded universities would have to cease their activities. Wittenborg, the most international business school in the Netherlands, being privately funded, would naturally continue to recruit students from around the world, as it offers no Dutch-taught programmes and is reliant on its pillars of internationalisation and diversity. Wittenborg is not a member of the AUAS, or the UNL, but is a member of the NRTO who represent privately funded universities of applied sciences. The NRTO institutions have not been requested to scale back their activities internationally.

During a debate on budget for Onderwijs, Cultuur en Wetenschap (Education, Culture and Science - OCW) in November, members of the Volkspartij voor Vrijheid en Democratie (VVD) party demanded legislation be introduced by spring 2023. The VVD is currently the largest party in the Netherlands. Sitting OCW Minister Robbert Dijkgraaf of the Democraten 66 (D66), the second-largest party, is not in favour of such a bill. The Spinoza Prize-winner said during the OCW budget debate that he is still conducting an exploratory study of the educational system and wants to make a research-backed decision.

VVD Minister Hatte van der Woude responded by filing a motion calling on Dijkgraaf to come up with a bill before summer 2023. Dijkgraaf still advised against this, yet was only successful in convincing the parties D66, VOLT, Faction Den Haan and independent parliament member Gündoğan. All other members of the Tweede Kamer voted in favour of demanding a bill to limit international students before summer 2023. Despite the support of some large research universities, like the University of Amsterdam and Technology University Delft, such a bill will have direct effects on the internationalisation strategies of smaller schools like Wittenborg. This is because the unnuanced bill regards the active recruitment of students overseas. Dijkgraaf has already conceded that Dutch higher learning institutions must be responsible about international recruitment and offering English-language programmes, with exceptions made for fields or regions experiencing shrinkage. Parliamentarians such as Peter Kwint of the Socialistische Partij (SP) would like these exceptions waived, and the recruitment of international students to be temporarily waived altogether, citing a shortage of available housing.

Kwint argues that the excessive recruitment of international students by certain institutions amid an affordable housing crisis comes at the expense of international students, who often arrive here with no place to live. This has resulted in such horror scenarios as arriving students having to camp in tents in a sports field for weeks on end. Kwint finds that active overseas recruitment must be halted until research universities get a handle on their student population.

After Dijkgraaf insisted he would present proposals by February, and a total cessation of recruitment is not advisable at present, Kwint made an appeal in cooperation with Harry van der Molen of the Christen-Democratisch Appèl (CDA) calling for an end to the active recruitment of international students until actions to reduce their influx are realised. Dijkgraaf is, therefore, compelled to answer by the end of next week on how he will realise the motion of the VVD calling for new legislation, as well as the joint motion of the Socialistische Partij (SP) and CDA demanding a cessation of recruitment activities.

Van der Molen and Kwint's assessment does not take into account smaller institutions, such as Wittenborg, which sustains its growth responsibly by offering housing to all incoming students. In fact, Wittenborg is nearly finished constructing a sustainable, 75-room housing complex for its students to compliment the schools’ existing housing facilities. As an institution dependant on international students, and the good standing of the Netherlands as an international study destination, Wittenborg asks for a reassessment of the ban on the public universities active recruitment, however for them to take more responsibility to ensure enough adequate housing. Unlike other institutions, Wittenborg is on top of housing for its student population.

Additionally, as Dijkgraaf noted, a ban on overseas recruitment could circumvent agreements made between the Ministry of OCW and umbrella organisations Vereniging Hogescholen and UNL. Little attention was paid to this agreement when the ministers voted. Most of the Tweede Kamer is especially unhappy that certain higher learning institutions ask for extra measures to reduce the intake of international students, yet continue to recruit them and develop new English-language courses. The University of Amsterdam has proposed a quota; however, it cannot implement such a quota of its own accord unless new legislation is drafted.

There do exist dissenting opinions within other research universities. Chairman of the Board for Maastricht University Rianne Letschert is sceptical about the University of Amsterdam's pleas for restrictions on intake. Letschert claims the Netherland's reputation as an international ‘knowledge country’ could be on the line, and that international talent should be encouraged to come here. Indeed, the arrival of internationals benefits Dutch society and the global reputation of our universities. Furthermore, the ban on active recruitment has the potential to disproportionately affect regional universities of applied sciences who do not engage in reckless and unsustainable recruitment tactics and who do not maintain exorbitant student populations.

Wittenborg's concerns to be sent to minister

Wittenborg is not satisfied with the way its questions to the previous minister have been dealt with concerning Dutch research universities recruiting under-qualified, international, high school graduates into their bachelor's programmes, and the use of unaccredited pathway programmes offered by contractors, such as Navitas, Study Group and OnCampus, who also act as agents managing a difficult to monitor network of sub-agents across the globe.

Wittenborg is especially concerned at the lack of public information about the two separate groups of international students - EU and non-EU, with those from the European Union making up over 75% of the total number, being funded by the Dutch taxpayer, with the right to study in another member state. It would be difficult to legislate against these groups, and only by banning English-taught degrees would they possibly be reduced in numbers.

Additionally, WUAS is confounded as to how a motion like that of the SP and CDA would be filed making exceptions for more responsible schools, and especially privately funded ones, who cannot be simply told to change, as they have no impact on the public purse. In fact, a school such as Wittenborg currently brings up to 25 million euro a year directly into the regional economy from outside the Netherlands.

As an institution, Wittenborg recognises the social impact of unsustainable recruitment tactics. The school understands the need to re-examine how to ensure a stable pool of affordable housing and support services for all students and people in the Netherlands. Wittenborg takes responsibility and ensures every incoming student has access to student accommodation. A more nuanced approach to international recruitment and intake would provide larger benefits to Dutch society than a simple quota that does not look at institutions’ individual practices and capacities. Wittenborg sincerely hopes whichever piece of legislation arrives in spring 2023 it will be crafted responsibly and with the input of all stakeholders.