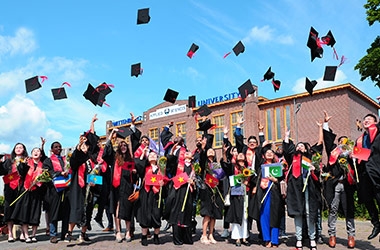 Happy graduates of the most international business school in the Netherlands.

Internationalisation as a Wittenborg model

Earlier this month, the Dutch Cabinet expressed the intent to limit the number of incoming international students within Dutch higher education, as Dutch research universities find it difficult to cope with the high numbers of international students. The stated intention is to gain better control of the total immigration flow into the country.

Prime Minister Mark Rutte explained during the weekly press conference that the Cabinet has created a workforce to look into migration as a whole, including relationship/family migration, student migration, labour migration and not only focusing on migration as a result of the human right to asylum. This work force looks at the full picture of migration into the Netherlands and the effect of it on the labour and housing market and the level of migration that Dutch society can bear. The goal is to develop a broad vision of the Cabinet on the Netherlands with regards to long-term migration. During a debate on the new asylum law, various parties within the Dutch parliament have expressed that the intake of international students should also be looked at when making plans to reduce migration. This would include roping international student into cross municipality asylum debates.

In a recent interview, the Dutch minister for Education, Culture and Science, Robbert Dijkgraaf claimed, ‘No university and certainly not as a nation, do we see [international students] as an economic model. So, we really want to see what the intrinsic benefits are.’ These comments do not appear to have been made in consultation with all higher learning institutions across the Netherlands. For an institution like Wittenborg, internationalisation – one of its key values – is the core of its economic model. Internationalisation at Wittenborg and throughout the Netherlands is, without a doubt, the most complimented aspect of the school and its locations on the part of students and staff members.

As partners to the Erasmus+ programme – which stimulates transnational cooperation within higher education – Wittenborg sees the further internationalisation of higher education as a net positive. Internationalisation of educational institutions through knowledge-sharing and a consistent flow of international students is conducive to the standardisation of education. It contributes to the assimilation of educational and, by extension, professional, scientific and public policy standards across the world, facilitating intercultural and international cooperation. Wittenborg views the arrival of international students as essential to realising this goal. That Dutch infrastructure is struggling to cope with the success of its educational institutions indicates a need to re-examine Dutch infrastructure to raise the quality of education and life for Dutch people. The answer is not to eliminate Dutch students’ competition. Nor is the answer to deprive them of opportunities to connect with those from foreign lands and gain intercultural competence, which only makes them more attractive candidates for jobs in a globalised world.

Internationalisation is the backbone of all modernised economies

Under the Netherlands’ current economic model, a consistent flow of immigrants is required to sustain the economy. In a modernised economy, as the rate of education rises, parenting becomes a 'calling' rather than an economic imperative to reproduce the coming generation of workers. This means people become less likely to have children in high numbers like previous Dutch generations. At the same time, as living standards increase, the population begins to age. This results in a dwindling pool of workers amidst rising social costs like healthcare for an aging native demographic, which is compounded by native residents – who are having fewer children – ageing out of the taxpaying obligation as they become pensioners. Fewer immigrants – especially labour and study migrants – under the current model thus equates to less social spending money, in addition to labour shortages (which are already affecting virtually every sector of the Netherlands), with the majority of resulting economic fallout coming down on the shoulders of the average Dutch person.

The costs for social spending will not be recovered by a simple reduction in population, as this will negatively impact the economy (which is projected to slow down), harming hard-working local Dutch businesses whom Wittenborg supports through projects such as LONKT. To cope with the shortage of labour and social spending money, it would be necessary to engage in austerity measures or risk a budget deficit, which Brussels is already warning the Netherlands about as a result of inefficient spending and structural neglect. A limit on the number of incoming migrants should be regarded as a warning of future actions to limit the amount of public money spent on improving Dutch people's quality of life, as less money will be available. This surely is not what Dutch people are thinking of when ham-fisted proposals are made to cap immigration in order to cope with an unsound infrastructure, which will continue to be unsound even if fewer migrants come to this country. What if, against all odds, the native Dutch population has a boom resulting in more strain on public spending and infrastructure? Who gets ‘voted off the island’ in that case?

This is not to mention how the legal conflation between standard migrants and asylum seekers will affect the Netherlands’ international reputation. Immigration policy constitutes one of the most direct intersections of domestic and foreign policy, and as such can never be examined without considering broader consequences for Dutch-based multinationals and the Netherlands’ political reputation in the long term. First and foremost, international students must be discussed within the context of the general debate about education – not immigration – and the right to asylum should not be confused with other forms of migration. The Netherlands is party to various treaties and conventions guaranteeing the human right to asylum, meaning drafting new rules lumping asylum seekers in with other forms of migration could put domestic policy in direct contention with international law. Furthermore, European legal convention differentiates between migrants and asylum seekers; asylum seekers are those looking for international protection, while migrants are simply people moving from one place or region to another. There could be a myriad of political and economic consequences for conflating these definitions under Dutch domestic law.

Before crafting a policy that will harm the economy, damage the reputation of the Netherlands and force Dutch businesses to cope with even worse shortages of personnel, other solutions must be explored. For example, the Ministry of Education, Culture and Science could demand that higher education institutions secure housing for incoming foreign students – as Wittenborg has been able to do unlike some other less international institutions. More investments should be made into projects like LONKT, which support local businesses to create more opportunities in less densely populated areas. Rewarding companies who allow employees to work remotely at least a few days per week could allow said employees to find housing outside more densely populated cities. Creating more schemes for international students to become lecturers and teachers would help fill the labour shortage in the education sector. Eliminating the cost-sharing standard would allow more Dutch students from low-income families to remain at home for longer, putting less stress on the pool of affordable housing and allowing them to gain more financial stability before leaving home.

Oversimplifying the problem by characterising the issue as overpopulation yields simplistic approaches to fixing the problem and will not generate the results sought by the Dutch population. A one-dimensional solution of limiting the pool of foreign talent before engaging in other structural measures would have negative results on the local economy and international relations, creating more headaches for Dutch people rather than resolving pressure on Dutch infrastructure.