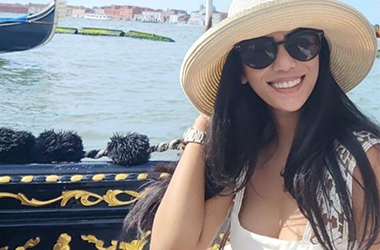 For July Selyanayagam, the opportunity to start a successful career came even before she obtained the bachelor’s degree in two specialisations – Real Estate Management and Financial Services Management – that she was pursuing at Wittenborg. Although Selyanayagam had already completed all of her modules, she was still writing her theses when she was hired by Dutch wealth management company Kempen as a business analyst in 2019.

“It was originally a three-month contract and in my second week they assigned me to the high-risk files, instead of the normal-risk files for which I had been hired. I got promoted pretty fast and within a month I got a permanent contract, because I had been working on this high-urgency priority project. That meant I had to fully focus on Kempen, and since I was getting great opportunities there, I decided to pause my studies so that I could invest in my career,” she highlights.

Born in Roosendaal, in the South of the Netherlands, Selyanayagam chose to study at Wittenborg because she believed that an English-language education would provide her with wider perspectives, including the possibility of an international career. “I am fluent in Dutch and I speak it mostly with my family, friends and when going out, but I had already been studying in English and, when I need to communicate professionally, it comes more naturally to me.”

In the student’s view, one of the best things about Wittenborg is the fact that the business school is extremely international and diverse, with people coming from all over the world. “You learn about different people and their cultures, how they speak, how they take things on; that teaches you how to adapt to different ways of thinking. At Wittenborg, you can get the maximum amount of exposure to other cultures, because there are students coming from everywhere,” she stresses.

Moreover, Selyanayagam points out that, while studying for her bachelor’s degree, she became interested in self-development and this has been highly beneficial for her career. “I think that many students might be underestimating the Personal Development Plan (PDP) that Wittenborg requires you to create. During my first year, I did all the exercises and I thought they were ridiculously easy and simple; I did not understand why we had to do that. And then, in the second year, when you do it again, you can see how much you have improved. This really got me into self-development. I started taking some coaching courses and they showed me how much you can improve over time if you put in the effort.”

According to her, the institution’s project weeks also give students the chance to develop multiple skills and competencies that will be valuable for their future careers. “While studying at Wittenborg, I was working at my dad’s company, so I already had some professional experience, but during the project weeks you get exposed to so many different people and different roles. Sometimes it is nice, but sometimes it is not and you have to make difficult decisions. I became more adaptable at Wittenborg, and that has definitely contributed to my career afterwards.”

Having initially joined the IBA in Real Estate Management, Selyanayagam soon developed a strong interest in the field of finance, due to the various finance modules that were part of her programme. In her second year, after noticing that it would be possible for her to also study Financial Services Management, she decided to combine both specialisations.

“I really enjoyed the finance modules, they felt like a hobby to me, and I realised that I would not need to do too many extra modules in order to complete that specialisation. Combining both specialisations was challenging, but I was very excited about finance and, despite the difficulties I faced on the way, I pushed through and it worked out fine.”

Eventually, the change in the student’s academic focus influenced her professional choices, and she decided that real estate was not the field where she wanted to pursue a career. “I worked in real estate for a year, but I discovered that it was not quite what I had thought it was. This was important for me, because when you study something, it is very different from what it is in real life; you never know until you actually experience it. After noticing that finance was what I really wanted to do, I got into Kempen and things just kept moving forward.”

Selyanayagam worked at Kempen for two years, until she felt that there was little room for growth left in that position. That made her look for other opportunities and, since June 2022, she has been working as a portfolio manager for Alpha FX – a foreign exchange company that offers a variety of tailored financial services for businesses.

According to Selyanayagam, this is a stimulating and challenging job, which has provided her with a steep learning curve. In regards to her plans for the future, she says that she would like to eventually become a senior partner and own a share of the company – something which is actively encouraged by Alpha FX. “But in the future, I would also like to see more women working in finance, because this is a wonderful field. Even though it might look like it is a tough industry, it is very rewarding, and women should join because it will be definitely encouraging to have more female colleagues,” she adds.

Asked about what advice she would give to current students, Selyanayagam says that stepping out of your comfort zone is the most important thing one can do in order to keep progressing. “It is okay to feel uncomfortable, because it means you are growing. What you want to do is getting to a point where being uncomfortable becomes comfortable, because deep down you know you are learning continuously. Even if it is a project week and you are the one that does not want to do the presentation, go for it and do the presentation. It might be horrible the first time, but if you do not do it, you will never become good at it. So, keep trying new things and make sure to never stop learning.”