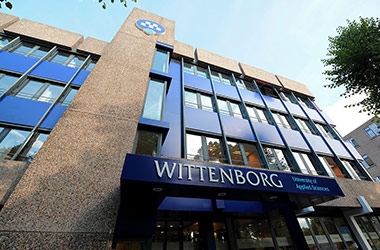 Apeldoorn: "The Most Beautiful Place in the Netherlands"

For Ural Erselcuk, a student at Wittenborg University of Applied Sciences, success is a matter of intention and practical application of learned skills. He says he first came to know about the school via Wittenborg staff member Sinan Colasan at a higher-education fair in his home country of Turkey. However, he mentions, “I had travelled to and lived around Europe and the Netherlands before." Although it wasn’t his first time in the country, Erselcuk knew he had found something special when he first saw Wittenborg in Apeldoorn. “I found it the most beautiful place in the Netherlands.” Starting off at the former Aventus campus, he says Wittenborg's staff have been very helpful to him on his journey.

“Modules such as the Project Weeks are classes which hone the skills of the students,” he explains. “It gives a good approximation of the workload that is expected.” Erselcuk says it was during these Project Weeks that he developed his intercultural management capacities. “Managing these different types of people is a worthy challenge,” he says, noting that encountering such diversity can push personal growth. “My goal is to become a businessman within the Netherlands. I thought this was the perfect place to make my goals come true with a supportive school and a good city with opportunities to grasp.” Thus far, Erselcuk is on track to fulfil his goal, having recently acquired ownership over one location of a restaurant chain – Ribs Company – before even graduating.

Before he took over the Ribs Company in Apeldoorn, he indicates, he did not intend to enter the catering industry specifically. “I was looking at every opportunity I could find before the end of my education to ensure my work and stay in the Netherlands,” he admits. “I came across the Ribs Company after searching for places to run in and around Apeldoorn after months of research, brainstorming and business analyses.” He says, however, that he did have some experience on the service side of the restaurant industry – just not inside the kitchen. “But it did not scare or stop me, as I try to innovate upon any job I hold.” Continuing, he explains, “I took over this already-working company in hopes of growing the restaurant itself and making it into one of the most innovative companies in the area.”

As the owner, his role is relatively dynamic. “I am expected to perform any and all duties.” For him, this includes kitchen prep, cleaning, cooking, food runner and food delivery. Additionally, he is in charge of all the paperwork and structural planning for the company. This planning includes recruitment, marketing, education, documentation, scheduling, negotiation and establishing a standard order of operations. He credits his education at Wittenborg for preparing him for his role. “Business Management classes have given me the ability to look at the daily workings of a company and see the processes in a broader way; what we are doing, and how it fits into the theory of a research paper.”

Ercelcuk's future plans feature continued growth across industries. “Branching out and investing in different areas is my goal itself. Being active in many areas and businesses where I can contribute to the betterment of humanity and the Netherlands, which is a supportive environment for entrepreneurs.”

There Will Be an App for That

“In addition to the one restaurant, I'm looking to stabilise the processes and automatise them to the best of my ability.” He says that for this reason, he is in the process of developing an app for that. “I'm developing my own app for managing the processes inside the store to streamline the whole cooking process,” he notes, indicating that this endeavour may result in multiple applications to optimise efficiency. Ercelcuk says that after graduation, he won't be finished with Wittenborg. “I also see the capacity of Wittenborg and would like to establish an Incubation Centre within the university of applied sciences.” He hopes to be able to work with students looking to establish their own companies or looking to work in one of the businesses which would emerge from there.”

His advice for fellow students is to always remain practical in their education. “Learn about what you are taught in the most analytical way,” he says, encouraging flexible thinking. “I would also like to self-advertise and invite any near-graduation students to work with me at Ribs Company in a managerial position near graduation, as I believe there is great potential in this school's students. I've met many great individuals with lots of ideas,” he notes, complimenting Wittenborg's talented student body.