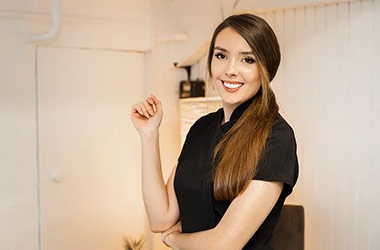 For Wittenborg graduate Carolina Lopez Roque, quitting her job in the hospitality industry to start a new career as the owner of the Brigi Nails salon, in Amsterdam, was not an easy choice to make. “If you are an entrepreneur, you must know your value, and this is the most difficult thing. You need to believe in yourself, have the courage and take the risks. It took me some time to learn that, but after making that decision things have grown so fast,” she says.

Originally from Almeria, Spain, Lopez Roque came to the Netherlands ten years ago, to live with her Dutch partner at the time. At first, because she could not speak any English, she was only able to get low-paid jobs in restaurants and hotels. In order to have access to better opportunities and also inspired by her ex-boyfriend, who was pursuing a hospitality degree in The Hague, Lopez Roque decided to study hotel management. “This was a last-minute decision, because it was already September and I had checked many schools, but all of their applications were already closed, which meant I would have to wait for another year to be able to enrol. But then I read about Wittenborg, and the fact that they have six entry dates was very convenient for me. So, after having a look into that, I liked the school and decided to study there,” she explains.

Having obtained a bachelor’s degree in International Hospitality Management, Lopez Roque highlights that her studies provided her with multiple skills and competencies that would prove useful over the course of her career. “One of my most significant achievements was to become fluent in English. I came to the Netherlands without knowing a word of English, and so my level was very basic when I started the programme, and I failed most of the modules in the first year, before I finally managed to improve. Eventually, I learned many other useful things; the business modules taught me a lot about taxes, as well as how to deal with finances and spreadsheets. And I also developed crucial research and investigation skills, which enabled me to start my own business and get to where I am now.”

During her studies, Lopez Roque did an internship at the Park Hotel, in Amsterdam, where she worked as a housekeeping team leader – an experience which she says made her learn, in practice, how hotels work. “After I graduated, I worked at another hotel for six years. There, I started as a housekeeping team leader and then moved to the front office, where I also became a team leader. When you work in five-star hotels, you work to the clock, facing a lot of pressure; I learned how to manage clients, how to handle complaints and how to get everything ready on time, in line with high quality standards. It was quite demanding.” 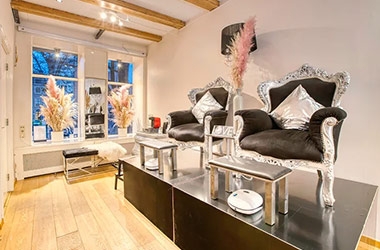 With the goal of making some extra money and also pursuing a new hobby, Lopez Roque started taking manicure classes four years ago. Soon, she went from doing her friends’ nails to having a bigger customer base, and decided to rent a small place in order to tend to her clients. Having changed to the night shift at the hotel, the entrepreneur started working from 23:00 to 07:00 at her regular job, while doing nails between 10:00 and 18:00, in what she describes as a “completely exhausting” routine.

After a year doing both things, she had enough clients and was making enough money as a manicure to leave the hospitality industry. Two weeks later, however, the lockdown started, initially catching her by surprise. During the two months she had to stay home, relying on her savings, Lopez Roque decided to use her free time to learn more about marketing, also building up her Instagram profile and getting in touch with influencers. “On top of that, I signed up for some online manicure courses taught by Russians, because they are the best in the field. The videos were entirely in Russian, but they had subtitles which I would translate into English or Spanish, thanks to Google Translate. Those courses taught me many advanced techniques that I now teach at my salon,” she points out. 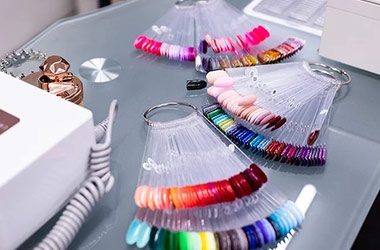 With the end of the lockdown, the entrepreneur reopened her salon and her clients returned. Additionally, she created an account on Treatwell – a platform on which clients can book appointments at beauty salons – and started some partnerships with social media influencers, which brought her many new customers. Currently, Lopez Roque employs two other professionals. She plans to grow her business, but says she prefers waiting until the pandemic and other sources of instability – such as the war in Ukraine – are definitely over.

According to Lopez Roque, her background in hospitality has enabled her to offer higher quality services to her clients. “Because I worked in hotels where I was talking to people all the time, I developed these social skills that have made it possible for me to bring the five-star hotel experience to my nail salon. I treat my customers nicely, by making them a cappuccino and listening to them talk about their lives, while I tell funny stories about my own life. This way, they have fun being there.”

She adds that customers are happy to pay more when they have access to better treatment. “At the beginning, when I was desperate to find customers, I took lots of cheap clients, and those are the ones who complain the most. Then I realised that by being confident about my skills and offering high quality services, I manage to attract people who are willing to pay more in exchange for excellence.”