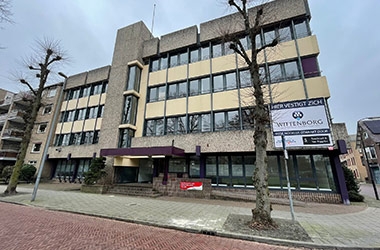 In July 2022, after 12 years at its location in Aventus, Wittenborg will be moving into a spacious and comfortable building it has just purchased at Brinklaan 268. The new administration & study location is connected by an overhead walkway to the institution’s existing student dorm, at 3 De Ruyterstraat, where 40 students are currently living. Additionally, it is a stone’s throw from the new housing facilities that are being built on De Ruyterstraat, which will accommodate 75 students (read more here), and a short walk from Apeldoorn’s city centre.

With a total area of 1,900 m2, the Brinklaan building has three floors, a large cellar and parking spaces for 21 cars, being significantly larger than Wittenborg’s current study locations at Spoorstraat and Aventus, both of which are approximately 1,000 m2.

The president of Wittenborg, Peter Birdsall, explained that the school’s administrative activities will be concentrated at the Brinklaan location, while the teaching will be divided between the new facilities and the Spoorstraat building, which will remain active with five classrooms and a reception front desk. Birdsall added that the institution is making significant investments in its infrastructure, with the goal of providing students and staff with comfortable, state-of-the-art facilities.

“Over the past few years, Wittenborg has grown considerably, in a gradual and planned way. We have gone from being a very small business school to a medium-sized school, and last year we came to the conclusion that we needed more office space, because we now have much bigger faculty, staff and student bodies than before. Besides that, Wittenborg has been putting a lot of effort into increasing its academic level and the quality of the programmes, which means that its staff are conducting more activities such as research and research projects, which also require more space,” he said.

Originally built in 1989 as a government building, the new location is in good condition, but will undergo some renovation in order to fit Wittenborg’s needs. The works, which will be conducted by regional companies Linthorst Techniek and Intermontage, include changes to the building’s insulation and positioning of the walls, the creation of new environments and the installation of new ventilation and heating systems. Moreover, a new outside seating space will be built at the front of the building, its sunniest area.

“It is a nice and impressive building, and we will maintain the bright, colourful scheme that is in its interior. When it comes to the outside, we will clean up all the stone and change the colour of the paintwork to make it look smart, which will be great for photographs. This location comes with a bonus, because Amaliapark is just in front of it, so it is a very green area,” Birdsall highlighted. He added that the companies which will perform the renovation works are trustworthy and well known to Wittenborg. 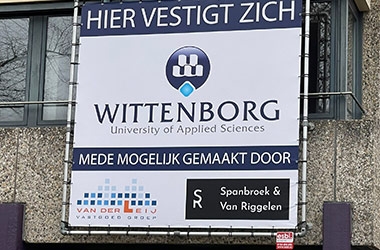 Among other facilities, the new building will have a reception area, classrooms on every floor, bookable presentation and meeting rooms, a canteen and open spaces for faculty, staff and students. Moreover, the new location will have work spaces and multiple offices, where Wittenborg’s management, finance, marketing and admissions teams, as well as faculty members, will be based. In total, the Brinklaan location will be able to accommodate 180 students and 60 staff and faculty members at any one time. 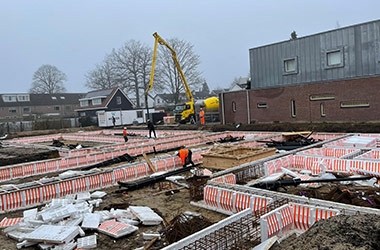 Some of the building’s most distinguishable features will be the glass walls at its front, which will make the inside visible to passers-by, and the walkway on the second floor, which will connect it to the student accommodation at 3 De Ruyterstraat, enabling some lucky students to avoid cold and rainy weather when going to class. Wittenborg is also building 75 new student housing units — self-contained apartments on the campus.

According to the president of Wittenborg, the idea is to spread students, faculty and staff throughout the whole building to create a warm and vibrant atmosphere. Birdsall also mentioned that the purchase of the building is connected to the institution’s long-term plans for building a large study complex near Apeldoorn railway station, which will contribute to the development of the city. “I think that Apeldoorn will be really happy as well, because we will be more visible and we are absolutely committed to developing the city. We want Apeldoorn to turn into a real hub for families and companies in the 21st century, which is going to get increasingly more important as the Dutch west coast gets completely filled. People want more space, more green and quality of life, so there is a real opportunity to keep working with the city in other projects that are going on,” he stressed.