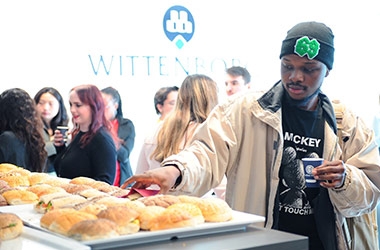 A quick guide to eating in the Netherlands

If you travel to another country, it means you encounter new food cultures. People moving to the Netherlands have to get used to Dutch food and the etiquette at the dinner table, as it is a bit different from surrounding countries. Dutch food culture is heavily based on meat, bread and potatoes. It is not unusual for the Dutch to eat bread in the morning and afternoon, and end the day with potatoes, vegetables and meat. Although it does not sound so spectacular, Dutch food culture is known for its long traditions and influence from other cultures.

To know the origins of Dutch food culture is to know the history of the Netherlands. Since the 16th century, the Calvinist way of life has been dominant in the Netherlands, meaning that life should be centred around work and that food is not to be enjoyed but to fill you up as quickly as possible, so that everyone can get back to work. You still see this way of life in the Dutch office, where lunches are not communal and long, but are meant to be eaten as quickly as possible. It is not uncommon to eat while working. Bread and potatoes are both products that contain a lot of starch, which acts as fuel for the body, giving you energy to be active. This helps to put the Netherlands in the top division of labour productivity per hour in Europe.

Bread has always been an important part of Dutch food culture. In the 17th century, bread was the dividing food between the working class, who mostly ate brown bread made of rye or wheat, and the aristocrats, who ate white bread. Ingredients for bread were readily available and were made by peasants, so bread became the staple food. The strong presence of bread in the Dutch diet is still visible.

A typical Dutch breakfast consists of a few slices of bread, with butter and cheese, ham, sausage or 'hagelslag' (chocolate sprinkles). The Dutch also spread peanut butter, strawberry jam or honey on their bread. With that, you can have a 'beschuit' (light, round, rather crumbly rusk) with butter and cheese or sprinkles on it, or 'ontbijtkoek' (honey cake) with butter. Drinks are milk, hot tea or coffee in the morning.

The Dutch start their lunch around noon, usually around 12:30 p.m. The only hot meal the Dutch eat in the afternoon is soup, and the rest is still sandwiches and some kind of breakfast. A very common soup in the Netherlands is 'erwtensoep' or 'snert'. It is a split pea soup with vegetables and meat and should be thick enough to stand a spoon up in. Snert is usually served in winter and late autumn, served with rye bread and bacon, and is especially popular with ice skaters. In other seasons, tomato soup is more common.

Dinner is the one time when the Dutch always eat hot food. The classic Dutch food is called AVG, which stands for 'aardappelen, groente en vlees' or potatoes, vegetables and meat, the main ingredients for a classic Dutch meal. Especially in winter, stamppot is a very popular dish. It is potatoes mixed with vegetables, gravy and a piece of meat to go with it. The vegetables can include sauerkraut, carrots (also served with apple and onion) or spinach (served with egg). These dishes are usually eaten in winter. For dessert, people often eat yoghurt, porridge, pudding or custard, all made from dairy products.

Dutch food culture is really based on meat and dairy, so if you are vegan, you have to look for alternatives. Fortunately, vegan alternatives are becoming more common in the Netherlands. In every shop, it is normal to have vegan versions of many non-vegan products. 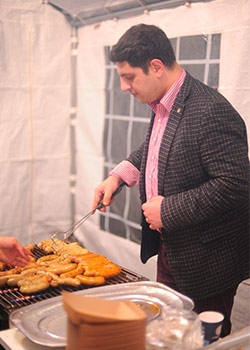 Eating should also be ‘gezellig’

The Dutch have a rich culture when it comes to eating at festivities. Especially during the winter period, when the days are dark and cold and everyone gathers in their homes, a lot of food is served to get through the winter. Sweets include the 'pepernoten' sold in shops during Sinterklaas. At Christmas, many Dutch do 'gourmetten', a smaller form of barbecue. It is a kind of table cooking with meat, vegetables, fish and basically anything you can grill at a barbecue. Speaking of which, it is a real folk tradition for the Dutch to light the barbecue in summer. On New Year's Eve, the Dutch eat 'oliebollen', round dumplings of dough.

Very important in Dutch food culture is not just the food itself, but also the social gathering. 'Gezellig' is a typical Dutch word meaning that a cosy get-together is comfortable. Gezellige people are really engaging and fun to talk to. People eat together in a gezellige gathering, sit in a circle in the living room or outside in the garden and talk about daily life. As the Netherlands is a very small but densely populated country, it is quite easy to see family regularly. A festive gathering usually starts with family and friends coming together with small snacks on the table. First, sweet with coffee, and around 4 p.m., savoury snacks and alcoholic drinks arrive on the table. Dinner is usually the highlight of the day and consists of a three-course meal. The day usually ends with everyone having a cup of coffee or tea before heading home. Dutch parties are usually very carefully planned, so everyone knows what is going to happen during the day and what time everyone gets their food and drinks.

The Dutch like to stay within their own circle, and it is not acceptable to attend a party uninvited unless explicitly stated. If you make Dutch friends, they will probably invite you for drinks and probably not invite you to their house, but to a bar. They would not be so quick to invite you to dinner. Being invited to dinner in the Netherlands means you are considered family. If you are invited to a dinner party, don't be surprised if you get asked a lot of questions and become the centre of attention. It is Dutch courtesy to show interest in someone they don't really know, and they know what to ask about when you visit another time.