MBA Student Writes Thesis on Diversity in the Workplace 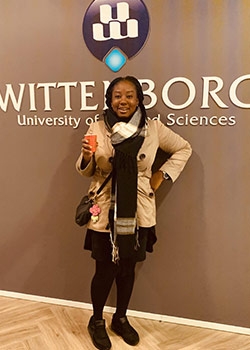 Eshun, who is originally from Ghana and completed an MBA in International Management, employed qualitative methods in her study. Titled “Examining the Effect of Workforce Diversity on Employee Motivation at Buurt Talent Ontwikkeling (BTO)”, her investigation is based on questionnaires that she administered to 110 respondents, including students, teachers and the organisation’s director. In addition to that, she conducted three interviews with teachers.

According to her, the topic of workforce diversity is highly relevant to the globalised world we are living in, particularly in a country like the Netherlands, which has a large migrant population. “I wanted to understand how Dutch society can harness the talents of migrants and how diversity within work environments can motivate employees to achieve organisational goals,” she says.

Eshun explains that she chose BTO as a topic of investigation because while a considerable amount of research has been done on for-profit organisations, there is a significant lack of studies concerning non-profits. She adds that because Buurt Talent Ontwikkeling is located in Amsterdam Zuidoost, a densely populated migrant neighbourhood, its students and teachers have diverse ethnic backgrounds, with many being originally from countries like Suriname, Ghana, Nigeria and India.

While conducting her study, Eshun had to face challenges such as the fact that some of her respondents were not fluent in English, but she managed to overcome this obstacle with the assistance of her supervisor as well as the organisation’s director. “I wrote the original questionnaires in English, but they were translated into Dutch for respondents and later translated back to English for interpretation and analysis. Both BTO and its director were very welcoming and collaborative, and their support – as well as my supervisor’s – was essential for my research,” she stresses.

One of Eshun’s most significant conclusions is that BTO has an unwritten policy regarding inclusivity and an organisational culture based on respect for all, in which the teachers appreciate and understand their own diverse ethnic backgrounds and those of their pupils. According to the study, this allows the staff to produce and share organisational knowledge, build trust in the community and offer a unique service to an underserved population.

“My research has also revealed that the children at BTO see no diversity among themselves, which goes to prove that there is one identity which is the human race, with no differences in regard to ethnicity. By conducting this study, my knowledge of diversity has been significantly improved,” she highlights.

Regarding her plans for the future, Eshun says that she would like to gain work experience in the Netherlands, possibly in a diverse context where she could network and share her ideas. “I am an advocate for workforce diversity and would love to volunteer at an organisation, with the goal of sharing my experience and knowledge about the importance of promoting diversity at the workplace.”

Because one of Wittenborg University of Applied Sciences’ main pillars is diversity, the school has conducted multiple projects in partnership with Buurt Talent Ontwikkeling. These initiatives include research on the effectiveness of supplemental education programmes and activities geared towards helping children of immigrant families improve their English skills.