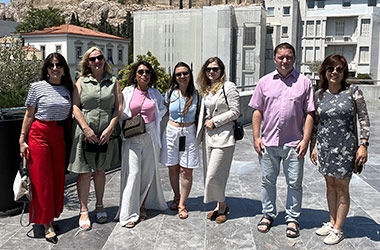 With the goal of discussing important details and planning the next steps of Erasmus+ research project #Influera, Wittenborg participated in the initiative’s first physical meeting held in Athens on 26 July. The activity brought together the four institutions that are part of the project, also including its coordinator, Fundacja Eduvibes, from Poland, as well as Social Cooperative Enterprise Drosostalida (Greece) and Tum Engelliler Kultur Sanat Dayanisma ve Spor Dernegi (Turkey). Wittenborg was represented by CEO Maggie Feng and EU project coordinator Aydan Ismayilova.

During the activity, the four institutions finalised the project’s work plan and outlook, confirmed the budget and established the guidelines necessary to start the development of the first intellectual output. Additionally, they set the date for the next partner meeting, which will be hosted by Wittenborg in Apeldoorn in December 2022.

Previously, the partners had held an online meeting last April, shortly after the project was approved. Since the official announcement of #Influera, all of its members have been busy with the legal and administrative aspects of the initiative. The research work will start in the next few days, after the team responsible for conducting it has been assigned to the project.

Together, the four partners will develop a mapping of digital influencers, which aims to enable young people – aged 18-30 – to better understand this professional role and the skills that it requires, by highlighting the stories of successful individuals in the sector. In addition to that, a training kit on social media literacy will be compiled – covering topics such as digital skills & media literacy, as well as entrepreneurship – to instruct its target audience on how to create a digital influencer’s campaign. More information on Influera can be found here.

Wittenborg’s EU project coordinator Aydan Ismayilova highlighted that this is the first project that the school’s Research Centre joins as a beneficiary, and not as the coordinator. Ismayilova added that this was also the first physical meeting attended by Wittenborg’s Research Centre in two years, after the end of the Covid-19 related restrictions. “Meetings like this allow partners to build a good foundation from the very start of projects, which in the long run makes the collaboration much easier,” she said.

According to the EU project coordinator, #Influera will be developed through a five-step process, involving multiple research methods such as literature reviews, surveys and data analyses conducted by each partner in their respective countries. The preliminary works will be completed and compiled into national reports before the next partner meeting in December.

“This is a short and small-scale project, which will be finalised by July 2023. However, once we reach its initial goals, it has all the potential to be further developed into a wider project conducted by a bigger consortium, which makes it more challenging and inspiring. On top of that, #Influera focuses on developing digital competencies, which are major skills to have these days regardless of the industry you are working in; the idea is to create more tangible and applicable tools that anyone can tap into,” Ismayilova stressed.