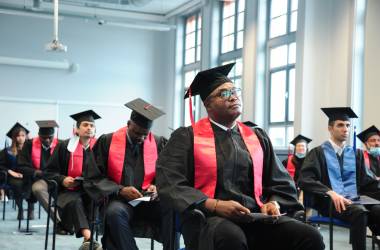 Despite the downturn in the European economy due to COVID-19, the majority of WUAS' latest international graduates still plan to have a go at finding a job in the Netherlands in the coming year. The rest will either continue their studies here or try to start a business, while a small number will return to their respective home countries.

This was revealed in a small survey done among graduates just before Wittenborg's 2020 Summer Graduation Ceremony in mid-July.

Asked about their plans post-graduation, about 55% indicated that they would like to stay in the Netherlands to look for a job. A handful, like MBA student Diah Syauqiresa from Indonesia, managed to secure a job before graduating. Her strategy? To ensure the internship she applied for as a student has a high probability of turning into a permanent position later. Two other MBA graduates, Hanna Abdelwahab and Maike Nuyken, have already started employment at Wittenborg.

Abdelwahab, who is of Singaporean and Egyptian nationality, is working in Wittenborg's education department and was a teacher for many years. "Education has always been my forte, and to work in a higher educational institution has been my target for a few years. It's a new milestone in my life, to move up higher from teaching lower primary to higher secondary and now being in a higher educational institution. I also hope to set up a business too (education related) when the time is right."

But not everyone is that lucky. Another student, who wished to remain anonymous, said he got an offer for full-time employment at the company where he interned, but that contract was cancelled as soon as corona hit. He now plans to use the search year granted by the Dutch government to non-EU graduates to look for a job.

About 15% plan to continue with their studies, with the majority planning to do it in the Netherlands. A few more indicated should they not find a job, they will further their studies. A small number is unsure about their immediate plans after graduation. About 10% plan to start a business.

Several European countries published data on their economic growth during the worst part of the corona crisis. In the Netherlands, Gross Domestic Product (GDP) fell by 8.5 % in the second quarter of 2020, according to Statistics Netherlands (CBS):

"More than half of the decline over Q2 is attributable to the nosedive in household consumption, while investments in fixed assets and the trade balance also decreased sharply. The GDP contraction is smaller than the eurozone average (12.1%) and compared to surrounding countries such as the UK, Belgium and Germany."