The Advantages of Learning New Languages Skip to main content

The Advantages of Learning New Languages 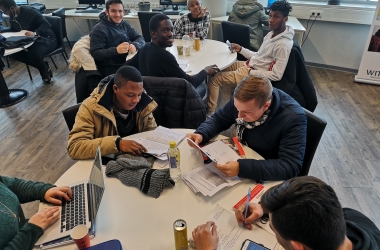 Wittenborg's students (and staff members) come from all over the world. To illustrate: In the period between 2016 and 2021, Wittenborg was academic home to students from 116 different nationalities. For many of our students, English is already a foreign language. While at Wittenborg, students have the opportunity to learn even more languages, namely Spanish, French and, of course, Dutch. We encourage our students to take this opportunity seriously, as learning one or multiple foreign languages has many advantages.

First and foremost - and Wittenborg students above all will be able to relate to this - learning a new language allows you to connect with new people, which will broaden your personal network. Interestingly, learning a foreign language also improves your communications skills in your native language (or languages, if you were raised bilingual), as your understanding of the logic behind languages grows. Similarly, it has also been shown to cause improvement in other academic areas, including maths (logic is logic, after all).

Beyond basic communication, language is one of the most important tools to truly get to know and understand a new culture. This is especially advantageous if you moved to another country with another language, as most Wittenborg students have when coming to the Netherlands. Translations can get you far, and translation technology is getting better every day, but it is not quite perfect. Learning about and understanding new cultures is a great way to broaden your horizons, which helps you grow personally as well as professionally.

Speaking of growing professionally: learning foreign languages increases your chance of finding your dream job, as employers are increasingly looking for employees that can communicate in multiple languages, to engage with customers in exceedingly pluralistic societies, as well as help access and expand new markets at home and abroad. You can expect a higher salary, too.

Research has also shown that speaking multiple languages makes you a better decision maker. This is because, generally, a foreign language comes with less emotional baggage than one's native language, which means that when weighing options, one tends to be less emotional and more rational when doing so in another language. This allows you to weigh decisions both from a more emotional and a more rational standpoint, which puts you ahead of those that only speak one language.

Aside from improved decision making, learning new languages has numerable other measurable psychological as well as neurological benefits, among them better memory, better multitasking, critical thinking and listening skills, enhanced concentration, more flexibility as well as more creativity. Furthermore, learning a new language makes you more perceptive of your surroundings, which, among other things, makes you more likely to identify irrelevant or misleading information. In the age of fake news and information overload, this is a valuable skill. As you age, learning new languages also slows down cognitive decline, allowing you to stay sharp for as long as possible. From a purely physical standpoint, learning a new language makes your brain bigger, due to growth in the cerebral cortex and hippocampus. It goes to show that, in the end, the brain is just another muscle, which will get bigger and stronger with exercise, and learning a foreign language is one of the best exercises out there.