Wittenborg will Write to Minister about New Changes to Education Act 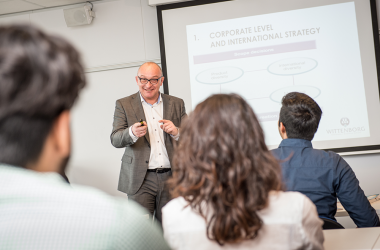 "Wittenborg a private organisation - it should not be obliged to maintain a policy about teaching in English."

WUAS will ask the Dutch Ministry of Education to exempt private institutions from proposed changes to the Higher Education Act, which will require them to maintain a strict policy justifying their choice to teach in English rather than Dutch.

Amendments to the act seek to silence growing criticism over the past year that education in Dutch is in decline due to the proliferation of programmes in English, thereby making a university education less accessible for Dutch students.  Currently, about 25% of master's degree programmes at universities of applied sciences in the Netherlands are taught in English, and 74% at research universities.

This has prompted the Minister of Higher Education, Ingrid van Engelshoven, to come up with measures to ensure that “the language choices of institutions have no negative effects on the quality, accessibility and efficiency” of education in the Netherlands and the environment in which it operates. She spells out the proposed changes in a letter to the Dutch House of Representatives (Tweede Kamer).

The public has until 28 January to respond to the draft legislation in what is called an Internet Consultation in which Wittenborg will participate. The university will also write to the ministry to air its views.

Wittenborg’s chair of the executive board, Peter Birdsall, said: “Wittenborg operates in English. Many staff do not speak fluent Dutch and certainly at least 90% of students do not speak much Dutch.

“Although WUAS is a higher education entity recognised under Dutch law, and its programmes are accredited (in English) by the NVAO, it is a private organisation. It should not be obliged to maintain a policy regarding teaching in English, just as it does not maintain a policy guaranteeing that it will not operate and teach in Dutch.

“The proposed changes are a result of the behaviour of publicly funded institutes and political pressure to ensure good accessibility to Dutch education for Dutch students. WUAS receives no money from the taxpayer. For all students it is a personal choice to study with us and we are completely transparent about the language used (English).

“We request the Minister to completely exempt all private education providers from these proposed regulations. There may be scope to influence the public sector - who use public money to operationally carry out the policies and tasks for the government -  however, there is absolutely no need for the private and independent sector to be subject to policies derived from government behaviour. Forcing us to operate in a particular language will also be a serious breach of the freedom for private organisations to operate in the way that they wish, in the language that they wish, offering the products that they wish.”