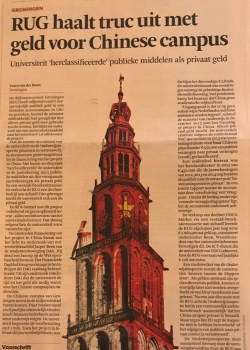 "Minister must make sure state-funded universities adhere to rules"

Six months after WUAS urged the Dutch ministry of higher education to investigate how the University of Groningen (RUG) went about distinguishing between public and private funding to finance their failed venture in Yantai, China, it has now come to light that Groningen went to great lengths to bypass an explicit ministerial order that taxpayers’ money should not be used to set up a branch campus in China.

In another letter, Wittenborg warned the Minister that they had been informed that Dutch Research Universities, such as Groningen, were registering unqualified international students into their bachelor's programmes, via private constructions such as Study Group.

Het Financieel Dagblad reported yesterday that RUG “re-classified” public money as private in order to invest in China. The university denies the allegations. This follows an investigation by a member of the university board, Jasper Been, into the €2.8 million project. Been is part of the student movement DAG, and used the Freedom of Information Act for his investigation.

On 13 February 2018, Wittenborg management wrote to the Dutch Minister of Education, Culture and Science, Ingrid van Engelshoven, to complain about the wider repercussions of RUG’s decision to abandon the China deal for the Netherlands’ image abroad. Wittenborg also asked that RUG, as a state-funded institution, give a full financial account of the ill-conceived venture.

Wittenborg asked the minister to make sure that, in future, "state-funded universities adhere to the rules which guide their decisions", that damage control measures be put in place in the aftermath of the Yantai-deal, and asked also for a full financial account of the venture.

Talks about setting up a branch campus of the University of Groningen in China already started at the beginning of 2015, with the university board being informed around May 2015. Only in 2017, when it became clear that the board would not concede to the plans, was the Yantai commission formed to gather the necessary background information to give the go-ahead. In the meantime, RUG had already concluded an agreement with Yantai and invested millions of euros.

According to FD the initial costs of the preparation for the project was estimated around €1 million. However, when the plans were abandoned in February 2018, an estimated €2.8 million had already been spent. The board was allegedly concerned about the plan’s weak financial basis. The lack of academic freedom in China was also much bemoaned in the press.

Instructions from the minister about the Chinese venture were made clear in 2015 when she wrote: “The bottom line is that Dutch public resources should in no way be diverted towards it.”