Wittenborg University Executive Board in the Public Eye 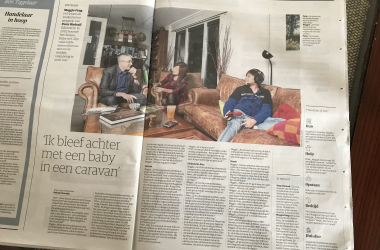 Wittenborg Executive Board in the Public Eye

As part of a series outlining the day-to-day workings of business families, the Birdsall family were interviewed at home along with their son, Marlon (11).  Maggie Feng, CEO of Wittenborg,  describes coming to the Netherlands as a language student and meeting her future husband. Maggie grew up in Beijing and after graduating from Beijing university in engineering, she came to the Netherlands to study at Saxion University where Peter worked as head internationalisation. "Then you all did wrong things, didn't you? Ha-ha!" she jokes!

Peter, Chair of the Executive Board at Wittenborg, already in the Netherlands with a daughter from his previous marriage, told how he got his life together through a teaching post at Saxion, after finding himself living as a single parent in a caravan [1999]. Peter was soon head of internationalisation and "After a chance meeting with Maggie, I decided to become a host family for international students, with a friend … all my friends' choices [of student] did not go through, but Maggie came to us."

The couple acquired Wittenborg, a private university and placed it under a family-owned trust in 2008. Since then they have developed it into one of the most respected and international private universities of applied sciences in the Netherlands.

How is it, juggling the demands of a business with family life?

Maggie’s job is 'personnel, housing and maintenance of networks at municipal and provincial level'. "It is a large company, we hardly see each other during the day. I am on the road a lot."
Peter works on 'national politics', education, ICT, sales and finance. “The school's a foundation, and there we work with a third person on the board. There is also an advisory board with five non-family members. There are about 40 teachers and we have 850 students from 90 different countries.

"Every morning I cycle with Marlon to Apeldoorn," says Peter "where he goes to the gymnasium [Grammar Secondary School]. At 7 o'clock, we get on the electric bikes and cycle the seventeen kilometres. We'll be back at three o'clock. I always do the cooking. The kitchen is my domain."

Maggie: "I get up around 7:30. I need an hour for myself in the morning, with coffee and the FD. I'm in Apeldoorn around nine o'clock. We never have breakfast together, sometimes on Sundays if Marlon does not play tennis. I app when I leave: on my way home.”

After dinner they watch the BBC news, especially now with Brexit, then RTL4, and sometimes a nice BBC-detective series. Maggie relates: "Twice a week I help Marlon with his homework. On Friday, I play sports when I bring Marlon to jiu-jitsu-les." Peter tries to get to bed before midnight. "I don’t sleep for more than five hours." Maggie is in bed at half past ten. "I try to read a few more pages, but I usually fall asleep. Maggie: "I am really the sleeper of the family."

Peter: "Then I also have a little time for myself."
You can read the full article here.