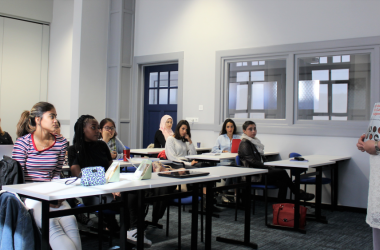 "It's all about Improving the Classroom Experience"

Students at Wittenborg will benefit from a few logistical changes this summer, which will result in smaller class sizes when the new academic year starts in September.

This has been announced by the management of Wittenborg University of Applied Sciences as the end of the current academic year nears. The summer holiday will start officially after Wittenborg’s 2018 Summer Graduation Ceremony on Friday, 13 July.

The university aims for approximately 25 students per class “with 30 being the absolute cut-off level”.

Wittenborg has always prided itself on the small size of its average class, but, of late, as Wittenborg’s chair of the executive board Peter Birdsall explains, the number of students per class in core modules has risen considerably.

“This was caused largely by retake and current students joining the same lessons, but also by the growing intake of first-year students in the bachelor’s during the year in blocks where traditionally small numbers would have joined.” Wittenborg has a rolling intake, which means students have 6 opportunities during the year to start their studies and 6 opportunities to graduate.

Birdsall said management was aware that the master's degree programmes (MBA) also have some bigger class sizes. “We will ensure that these also have adequate room sizes in the coming academic year.”

In the bachelor’s degree programmes, Wittenborg already took some actions earlier this year by making a clear division between International Business Administration (IBA) and HBA (Hospitality, Events, & Tourism) students. “This was, however, not enough to avoid the large classes in some core modules.

“We feel that this is affecting teaching quality and classroom experience and we aim to improve these significantly next year,” Birdsall said.

Unfortunately, he added, these changes come too late for those graduating, and he wished them every success for the future.