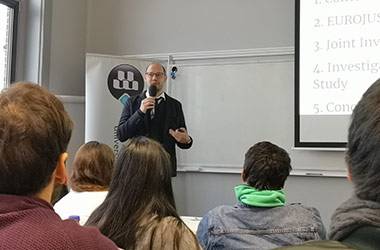 Wittenborg is proud to offer its students classes taught by lecturers with a lot of professional experience and interesting careers. A splendid example is senior lecturer Dr Eike Fesefeldt. Dr Fesefeldt has worked as a judge in the District Court of Stuttgart, Germany, as public persecutor in Stuttgart, and as a trial lawyer at the International Criminal Court in The Hague, the Netherlands. He has also taught at notable German universities such as the University of Hamburg and the University of Hohenheim.

Last month, Dr Fesefeldt started working at the Office of the Public Prosecutor General at the Federal Court of Justice (in German often referred to as Generalbundesanwaltschaft) in Karlsruhe, Germany. The Generalbundesanwaltschaft represents the federal government at the German Federal Court of Justice (Bundesgerichtshof) and has primary jurisdiction in offences that fall under the Code of Crimes against International Law (Völkerstrafgesetzbuch) and cases of crimes against the state.

To provide our readers with more information, we sent a couple of questions to Dr Fesefeldt, which he graciously answered.

What is your position at the Generalbundesanwaltschaft and what does it entail?

Dr Fesefeldt: I work as a prosecutor for the Generalbundesanwaltschaft. This office has several legal tasks. I am working in the section that prosecutes offences under international criminal law. In addition to prosecuting the perpetrators, this also includes securing evidence and questioning victims. We are particularly involved in investigations in connection with the Syrian civil war (crimes committed by the Syrian government as well as crimes committed by the so-called Islamic State and other groups). We are also investigating crimes that were committed in many other countries.

Dr Fesefeldt: My typical workday does not look so different from the workday of other lawyers. My primary task is to investigate international criminal offences. In practice, the police carry out these investigations. Once the investigation has been concluded, the prosecutor can either close the proceedings against the accused or file a public complaint. I communicate a lot with several police officers and coordinate the investigations. I also have to appear in court and communicate with other lawyers and the judges. The Generalbundesanwaltschaft only appears before the State High Courts [the high courts of Germany’s member states] and the German Federal Court of Justice.

Dr Fesefeldt: I enjoy working as a public prosecutor. Previously, I worked in such a position at the Prosecutors Office of Stuttgart and for the Office of the Prosecutor of the International Criminal Court in The Hague. The position gives me the chance to be creative. Instinct and negotiation skills are also required. Appearing in court or investigating actively makes the work as a public prosecutor very varied.

How do you think your experiences in this job can contribute to your classes at WUAS?

Dr Fesefeldt: I am a 100% lawyer and love my profession. In addition, my job includes many international issues. I hope that through my daily practice as a lawyer, I can clearly explain the sometimes difficult legal issues in the courses that I teach.

As readers can see, not only is Dr Fesefeldt an expert in the field of law, but he is also dedicated to fighting for justice around the world (#SDG16: Peace, Justice and Strong Institutions). The #WittenborgFamily is proud to count Dr Fesefeldt as a member and congratulates him on his new position.