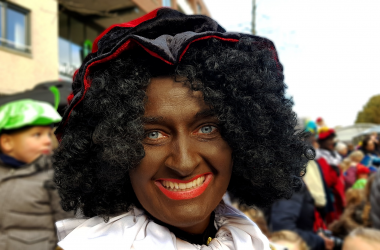 Wittenborg has welcomed the decision of the Apeldoorn city council not to include the notorious Christmas character, Black Peter (Zwarte Piet), in its annual celebration of St Nicholas Day on 16 November. Apeldoorn has been announced as the host city for the arrival of St Nicholas this year. The 'arrival' of St Nick in the Netherlands is traditionally in a different city each year, and is fully televised.

In Dutch tradition, St Nick and his black helpers, supposedly comes from Spain, a connection with the historical Spanish Rule of the Netherlands in the 16th and 17th centuries.

The Dutch 'version' of Black Peter has caused huge division in the Netherlands for the past 6 years with the Dutch insisting that the character - basically whites painted in black face - is not racist. Whilst in the Netherlands there are many 'black peters' surrounding the St Nick, in many other countries, including Switzerland and Austria, there is only one -  a character that is generally a soot stained young chimney sweep.

The council is hoping to sidestep the inevitable drama around the character by saying St Nicholas will have a helper, but it wont be Black Peter.

Meanwhile, Wittenborg's chair of the executive board, Peter Birdsall, applauded Apeldoorn's decision in a Tweet on Monday. He later followed it up with a press release, explaining why Wittenborg students and staff might be offended by the character.

"Wittenborg is very pleased that its students are not going to be overly confronted with the Zwarte Piet issue or debate taking place in ‘their’ town, for very obvious reasons – we want to protect our international students and staff from any form of ‘real, or indeed perceived, racism’. The decision by the Gemeente Apeldoorn fits perfectly with our overall views.

"Also, from a Board’s point of view – Africa is an important source of students for us, and we would not like any publicity that may disturb that."

Reacting to the argument that Zwarte Piet is a long-held tradition in the Netherlands, Birdsall said that times change and what is popular today, might very well be an embarrassment tomorrow.  "Speaking as a Brit, we had a similar issue in the UK where for many years the Black and White Minstrels was a very popular TV show for over 20 years. Wikipedia now states: ‘Since its cancellation in 1978, The Black and White Minstrel Show has come to be seen widely as an embarrassment, despite its huge popularity at the time. ..'. That says it all. Times change. Thank Goodness!"