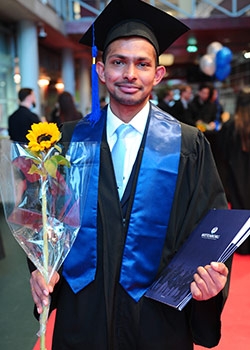 Originally from Sri Lanka, Rodrigo obtained a secondary degree in economics & accountancy before moving to the Netherlands, and chose Wittenborg because he felt the need to expand his knowledge in both fields. After he had started his bachelor’s in Economics & Management, based on his performance and high grades, his process tutor suggested that he also specialised in Financial Services Management.

According to him, the key to being able to reconcile so many different activities was following a regular routine. “Sometimes I managed to do things relatively effortlessly, but there were occasions when it was definitely a struggle. The hardest part was writing two theses at the same time, in the third year, and I was not sure I would manage. Then, in September, my dad became ill and I had to stop my internship and fly back home. During the period when I was in Sri Lanka, I tended to my family, but I also took the chance to really focus on my writing and I managed to successfully complete and defend both assignments.”

Rodrigo points out that by doing two internships in a row at GarantiBank over a period of 13 months, he was able to apply his learning to a practical context and develop important professional skills. Initially placed in the internet banking department, he was responsible for dealing with corporate clients, as well as payment systems, processes and services. Later, he was transferred to the execution of payments. “Coupled with my studies, this experience provided me with a holistic view. Thanks to what I had been learning at Wittenborg, I managed to understand why I had to follow those regulations and procedures in the work I was doing,” he says.

Currently, Rodrigo is working as a finance assistant for the Park Now Group, an Amsterdam-based company. “In this position, I work with accountancy and that is what I really wanted to do. I have been able to learn a lot and, eventually, I might pursue a professional course in Certified Management Accountancy (CMA).”

Regarding his life in the Netherlands, Rodrigo says that he has adapted well to the country and to Dutch culture, adding that he has managed to become fluent in Dutch by taking language classes and doing volunteer work, which involved having frequent conversations with elderly people. “I do like the culture and I have got used to the fact that Dutch people openly say stuff. Also, in the Netherlands you have to earn people’s trust before you can enter their social circles, and I have managed to get close to quite a few people.”

One of the nicest things in the country, according to Rodrigo, is that the nature is extremely beautiful and one can easily connect with it. He says that he also likes the fact that each Dutch city has its own, distinctive architecture.

Looking back at his time at Wittenborg, Rodrigo points out that he felt comfortable studying at a boutique institution with many other international students. “I liked that the classes were small, so that I could interact with the lecturers and my classmates. Besides, the services were really good, and the administrative office was always efficient when I needed their help. I could not thank them enough, because if that smoothness was not there, it would not have been possible for me to complete two specialisations.”