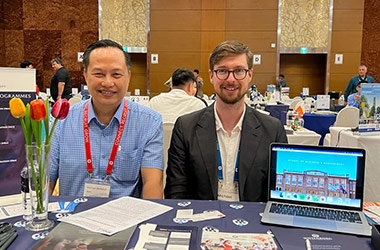 With the goal of establishing partnerships and networking with student agencies and agents from multiple Asian countries, Wittenborg participated in ICEF Asia between 28 and 30 June. Organised in a hybrid format, the event included online meetings as well as a series of activities that took place at the InterContinental Saigon Hotel in Ho Chi Minh City, Vietnam.

Moreover, Sheppard participated in various networking activities at the InterContinental Saigon Hotel. “I felt honoured to represent Wittenborg and the conversations I had were really productive, with the agents responding very positively to the school and to the Netherlands in general. Many agencies actually intend to expand to the Netherlands, for multiple reasons, but primarily because it is a great place to study. We established several new partnerships and strengthened existing ones as well,” he said.

According to the Sales & Admissions Representative, Wittenborg has many unique selling points that stand out to agents, including the fact that it is located in the Netherlands – with a high level of English proficiency – and the school’s six yearly intakes making it flexible and attractive to students. “Wittenborg is a truly international school, with more than 100 nationalities represented, and it is located in the Netherlands, which offers students something very close to a native English-speaking experience, but at a more affordable price. On top of that, by being based in the European Union, students get the chance to travel to many different countries, which expands their personal and professional horizons. These are some of the school’s most attractive aspects,” Sheppard stressed. 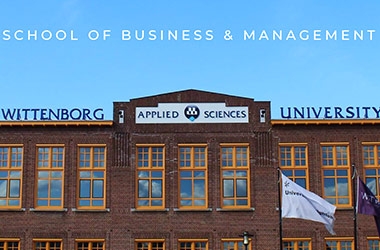 Corporate Relations Manager Iryna Bernatska explained that Wittenborg regularly participates in ICEF Asia, highlighting that the agents who attend this event have a good reputation and positive recommendations. “Agents play an important role in the lives of our students; they enable us to be present locally all over the world and to reach as many people as possible, and they do pre-screenings of all applicants as they know all of the school’s admission requirements. Plus, we often conduct webinars or livestreaming events on social media in cooperation with our partners, and we also participate in the student recruiting events that they organise. This gives us a chance to meet our prospective students and to get to know their needs and expectations,” she added.