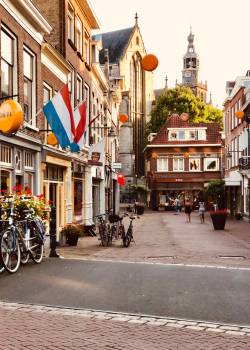 WUAS reiterated its commitment to increasing its students' employability and, in the case of international students wishing to work in the Netherlands, that must include raising their Dutch language abilities, according to the chair of the executive board, Peter Birdsall. To this end the institution, which already offers Dutch as one of its language modules, has increased its Dutch Intensive Courses, which Birdsall says definitely makes a difference.

The question of what it means to be "Dutch" and the place of immigrants (or descendants of immigrants) in Dutch society continues to be hotly debated in the Netherlands. Many feel that although they are "ticking all the boxes" to integrate, the unspoken expectation is that they assimilate - in other words, conforming entirely to the existing cultural norms of Dutch society, instead of enhancing it. The issue was extensively explored this week in a documentary Terug na de Akbarstraat, which was broadcast by the public broadcaster on NPO2.

Birdsall said he agrees with a comment by the chair of the Association of Universities in the Netherlands (VSNU), Pieter Duisenberg, this week who said internationals planning on a long-term stay must have a good command of Dutch if they want to be happy and participate fully in Dutch society. "Simply put, it will be good and make your life a lot easier if you speak Dutch," he said at a meeting on internationalisation, ScienceGuide reports.

Birdsall said that although many international graduates are working in the Netherlands, it will be tough for them to climb to the top in say a typical Dutch company without a good level of Dutch language abilities.

According to him, aside from the language factor, Wittenborg prepares its students in general for the labour market by teaching them, for instance, how to present themselves and other practical skills.

Duisenberg also emphasised the need for universities to attract talent from abroad - for the sake of the country's quality of education, but also for research purposes. "If you want to stay in the top league of universities, you need international talent from around the world."

Duisenberg proposes that to secure international talent, current visa regulations must be streamlined. "For instance, automatically getting a work visa once you obtained your Master degree. Other countries are already doing this. That makes the Netherlands an attractive option."