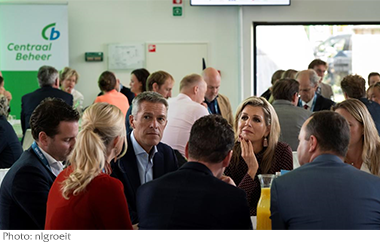 Meeting the queen can be quite an intimidating prospect, but Wittenborg CEO Maggie Feng took it all in her stride when she met the Dutch queen, Máxima, this week during the Gelderland Groeit event for entrepreneurs in the province hosted by nlgroeit. "I was excited, of course, but did not lay awake the night before worrying about what I was going to wear, or what I was going to say to her." 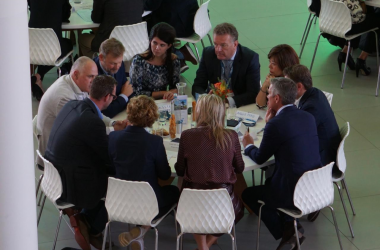 A Queen with a Mind for Business

Feng, who had the privilege of sitting at the same table as Queen Máxima, does admit to being a bit in awe when the moment finally arrived. "She has great presence and is even lovelier in person than on TV or in photos. I was also very impressed with her business insights - so not just a pretty face! As always, she was dressed really stylishly and was wearing these big, beautiful earrings which everyone admired."

Though there was no rigid protocol in place, attendees were warned not to take photos of or selfies with the queen. "At the same time, she was very down to earth, friendly and easy going with everyone," Feng says.

More than 100 business owners and mentors from the region were present at the event, where the royal was the guest of honour. Feng said one of the striking things about the queen was the attention she gave to each of the business owners she was introduced to. "You could tell that she really paid attention to what was said, and connected to the other person."

Like Feng, the queen arrived in the Netherlands about 20 years ago as a foreigner from Argentina. "You can still hear a faint accent when she speaks, which I found very soothing as an international myself," Feng says. "It's like a little pat on the back, saying 'Don't worry, you will be ok'."

Feng, who was one of 9 people at Queen Máxima's table and one of 3 female entrepreneurs, said she was also inspired by her fellow business people, like Kristel Groenenboom, owner of
Container Service C. Groenenboom B.V.

Learning to Trust and Depend on Others as a Business Owner

The two keynote speakers of the day were Atilay Uslu of Corendon and Hilde van Dijk of Slim Opgewekt, who shared their knowledge on ambition and the different growth phases in a business. According to Van Dijk the management phase was her biggest challenge. "I felt like an octopus, being pulled on all arms."

She said to really be successful you have to determine what might go wrong and trust your employees enough to let one arm work independently and learn from the experience, acknowledging that something might go wrong. This will all serve to make the organisation strong as a whole. "Have the courage to identify what you are good at and depend on the skills of others. That also means learning to listen."

Besides Queen Máxima, also present were the appointed Commissioner of the King, John Berends, the acting mayor of Apeldoorn, Petra van Wingerden, and the Chamberlain of the King in Gelderland, Prof. Daniël Wigboldus. A chamberlain supports and advises on the preparation of royal visits to their region.