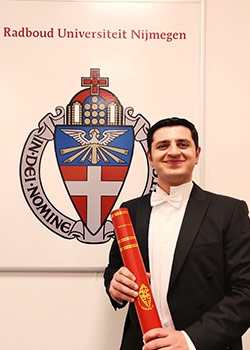 Wittenborg Assistant Professor Fahad Shakeel’s five years of dedication to his PhD research culminated in the successful defence of his thesis on 15 November, at Radboud Universiteit, Nijmegen. Although Shakeel started his doctorate in May 2016, he had been developing the project since he was a research assistant in Pakistan years before.

“I have always wanted to pursue research, and the topic of ethical leadership has been a long-standing interest to me so, by the time I decided to submit my PhD proposal to multiple universities, it was already well developed. This was really helpful, and I advise prospective PhD candidates to have a clear idea of where they want to go before joining the programme,” he says.

Shakeel, who joined Wittenborg full time this year, teaches various modules for bachelor's and master's programmes. Titled “Ethical Leadership: A Broader Definition, Conceptualisation and Measurement Scale’’, his thesis investigates the main virtues associated with ethical behaviours in leaders from the private and public sectors. The study proposes a model called the Broader Ethical Leadership Scale (BELS), which he tested based on a questionnaire that was answered by 909 public officials from the Netherlands.

According to Shakeel, he was intrigued by this topic due to the multiple scandals associated with leaders across the world, which damage the reputation of institutions: “Ethical leadership is a research field that is still in its infancy, but which is growing more popular. It does not only focus on leaders’ personal values, but also on the efforts that they make to inculcate ethical behaviours in their followers. In some cases, leaders are ethical but do not pass on their values, which is a limitation.”

While conducting his research, Shakeel had to face practical challenges, such as difficulties to find housing, but these issues never discouraged him, and he highlights how supportive and friendly his supervisors were. “Lack of motivation was never a problem for me, not only because I had a strong interest in the theme of my study, but also because my supervisors were really helpful and engaged. When you are starting a PhD, it is important to look for chemistry between you and your supervisors, because this has to be a trust-based relationship,” he says. 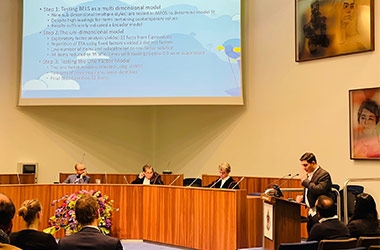 Shakeel explains that one of his main research conclusions is that the public’s expectations and perceptions about leaders are constantly evolving, simultaneously with society: “While previous research focused only on core ethical leadership values, such as being fair, having morals and acting with justice, my study proves that society develops new expectations as it evolves. In the globalised world we are living in, people expect leaders not only to care about their stakeholders, but also about values such as diversity, empowerment and sustainability. Besides, leaders need to have the ethical competence to go beyond just following the rules, and take context into account when making decisions.”

He defines his thesis as a starting point, stressing that he plans to develop further research on the topic of ethical leadership, with the goal of raising awareness about societal values and expectations concerning leaders: “Research in this field is important because it will provide us with a consensus of what ethical leadership entails, as well as new tools for education, which is at the core of raising awareness. The BELS scale is already being used by another Wittenborg lecturer, Bert Meeuwsen, who is pursuing his doctorate at Leiden University. Part of Bert’s study involves collecting data from students of the High Performance Leadership course at Wittenborg. His research analyses educational interventions on ethical leadership among international students of business studies.” 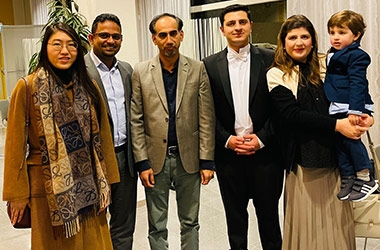 The thesis defence was attended by Wittenborg’s Head of School of Business, Dr Rauf Abdul, as well as Head of Operations Lasantha De Silva, and Manager of Academic Partnerships Myra Qiu. Abdul highlighted Shakeel’s qualities as an academic, researcher and professor, expressing the Wittenborg family’s happiness and pride in his achievement. “Fahad is a dedicated young academic with a great mindset for teaching and research. He defended his PhD in an excellent way, and ethical leadership is an interesting topic that has become more important than ever for both private and public offices. Many Wittenborg colleagues are eager to collaborate with him on research on this and other related topics for possible peer-reviewed publications,” he said.