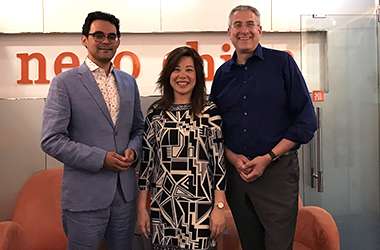 Wittenborg directors Maggie Feng and Peter Birdsall visited the Netherlands Education Support Office (Neso) in Beijing, China, yesterday to discuss recruitment of Chinese students to Dutch universities of applied sciences, and in particular to Dutch research universities. Their meeting was hosted by Neso director Mr Charles Hoedt, who is currently leading the ‘study in Holland’ initiative in China.

Neso also administers the Dutch Orange Tulip Scholarship award in which Wittenborg participates in all the countries that have a Neso. This year there is one successful candidate for Wittenborg’s Master's programme from China.

During their discussions, the parties briefly touched on the Yantai question, and the letter Wittenborg has written to the minister concerning this. Wittenborg said that they were perfectly satisfied with the response from the government and felt that it had been very much worthwhile highlighting this rather embarrassing adventure of Groningen University in China, so that in the future there would be more oversight in these cases.

Feng & Birdsall also discussed the Nuffic certificate, a certificate that every Chinese student wishing to study in the Netherlands requires. The Neso provides the background checks for this document, issued by Nuffic, in the Hague.

Birdsall explained that Wittenborg was investigating the implementation of the binary system, with regard to internationalisation, recruitment and admissions at Dutch universities of research compared to applied sciences.

The Netherlands has a relatively unique higher education system in that it mainly offers its university education in a binary system of 3 and 4-year bachelor’s degrees - at research and applied science universities respectively. This is the case in the other ‘Germanic’ higher education systems, such as Germany, Austria and Switzerland, however, in the Netherlands only students with a VWO high school diploma (3 A-Level equivalent) and higher, can enter a research university, whilst Dutch students with a HAVO high school diploma (equivalent to 5 O-Levels and 1 AS level) can only enter a university of applied sciences (with the possibility to switch to a research university after a successful first year at the 'HBO').

From their discussions with staff at Neso, Birdsall and Feng gained a useful insight into the interpretation of the Netherlands’ binary system with regard to student recruitment in China, and explained that Wittenborg would be continuing its research into this question. Neso has no influence on admissions criteria - these are set by the Dutch Act of Higher Education and implemented by the individual universities.