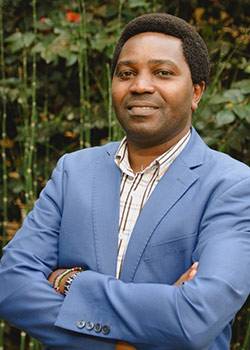 Conservation specialist Joshua Wambugu recently shared his expertise with bachelor's degree students at WUAS, drawing their attention to the importance of community-based conservation (CBC) as the road to sustainable tourism development. Even stronger, he argues for putting local community involvement at the centre of conservation.

Wambugu hails from Kenya – East Africa's strongest economy where eco-tourism plays a big part in the country's flourishing service industry. He used that country's conservation efforts as an example. The class he was teaching was on Sustainable Tourism Management to students doing a bachelor's in Hospitality Business Administration.

Wambugu has more than a decade's work experience in sustainable tourism and conservation. Currently he is a PhD candidate at the Marine Animal Ecology Group of  one of the Netherlands' top-ranked institutions, Wageningen University.

Aside from affirming the need to put community involvement at the centre of conservation efforts, Wambugu also emphasised the broad objectives of CBC to enhance wildlife and biodiversity conservation while providing economic incentives for local people. "Their involvement creates a ‘social licence or contract’ in attaining success for conservation projects in terms of local support and trust. The unwritten contract is achieved through a meaningful and trust-based dialogue where locals feel satisfied that their views and expectations are understood and considered. Lack of involvement and ineffective relationship means the success may be compromised.

"In other words, future attempts may encounter resistance or not be accepted at all. Communities have a crucial role to play in biodiversity conservation simply because communities are the hosts (key connecting stakeholders) and custodians of the natural resources. It also speaks to local knowledge (the value of indigenous knowledge), beneficiaries (sustainable use), stewards, and victims (of negative environmental impact)."

Coral reefs are widespread along the east African coast and Seychelle islands. Four years ago, coral reef along the Kenyan coastline was almost totally destroyed in some areas. Rising sea temperatures had triggered devastating bleaching episodes for the fourth time in less than two decades, and with the whitening of coral came a dwindling of marine life. Overfishing only exacerbated the problem.

That was until the Kenyan government started working with local communities to rehabilitate degraded coral reefs. Among the areas targeted was Wasini Island, a tiny strip of land off Kenya’s south-east coast where the initiative was led by women on the island. The results have been astoundingly successful.

As a PhD candidate, Wambugu's research will specifically focus on socio-economic and ecological impacts and potential sustainable livelihoods from the coral reef restoration taking into account the perceptions and attitudes of local communities, tourism, technology (coral reef restoration) and protected marine areas.