Survey: Pandemic Has Not Thwarted Demand for International Education Skip to main content

Survey: Pandemic Has Not Thwarted Demand for International Education 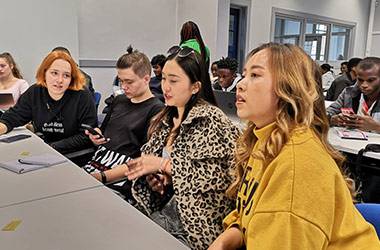 The demand for international education has not been thwarted by the COVID-19 pandemic, a new study has found - most students are still fully committed to seeing through their plans to study abroad.

Times Higher Education (THE) reports that 60% of high-schoolers say the pandemic has not altered their study abroad intentions, according to a survey done by Singapore educational technology firm Cialfo.  And while 32 per cent say the crisis has made them “more hesitant” to study abroad, 8 per cent are more determined than ever.

The figures come from the first of what Cialfo says will be an annual report on student recruitment based on the perceptions of 14- to 18-year-olds on the company’s student database. It says almost 3,800 students from more than 100 countries completed the online survey in April and May.

"The findings suggest students’ concerns since the pandemic’s emergence are little changed from before, with money worries and work prospects topping the list. About 49% nominated lack of access to financial support as a primary concern, with the same proportion citing job uncertainty in foreign countries after graduation," THE reports.

The Cialfo survey found that pandemic-induced hesitancy was more pronounced in the Asia-Pacific region than in other regions – such as Latin America, where students were only half as likely to report concerns about safety, racism and travel restrictions.

More Asia-Pacific students also expected the health crisis to undermine their enjoyment of overseas study, with many worried about COVID-19’s impact on their career prospects. Students in the region were also more sceptical of the value of an online-only university experience, with 62 per cent reluctant to pay full tuition fees under such circumstances – compared to fewer than half of respondents from Latin America, Europe, the Middle East and Africa.

At the same time, Wittenborg University of Applied Sciences' admissions team, reported from the recently held ICEF Virtual Asia conference that Asian student recruitment agents were pleasantly surprised at the quick rate at which the Netherlands is vaccinating its citizens against the coronavirus.

Leading the team was Lena Vandenbosch, Wittenborg's International Partnership Manager. She said: "We heard from many agents in different countries that the Netherlands is growing in popularity. Agents were also positively surprised to hear about the rate of vaccinations being given in the Netherlands and that students will be able to get vaccinated upon arrival. Many agents said they were eager to start promoting Wittenborg to their students as soon as possible."