Students Learn about Traits of a Good Business Leader from Expert 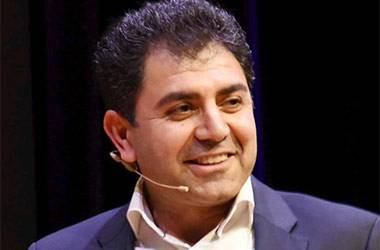 Top executive coach Hamid Safaei, who has led successful business transformations for a number of Fortune Global 500 companies, guest lectured at WUAS this week, talking to bachelor’s and master’s students about what to consider when designing organisation structures.

Safaei is best known for mentoring on leadership and personal development. In addition, he is the CEO and founder of Aubergini – a new, plant-based food company based in the Netherlands – as well as bestselling author and certified executive coach who helps leaders, senior managers and budding entrepreneurs multiply their results by taking their companies to the next level.

His lecture at Wittenborg was a mixture of personal experience, both on a private and business level, as well as challenging students to examine their own thoughts on the ideal organisational structure. Many cited examples from high-flying companies like Google, WeWork, Amazon, Apple and Netflix.

Safaei, who is originally from Iran, came to the Netherlands 20 years ago, but says it took him 7 years to really feel like the Netherlands was his home. "Every week I planned to pack my bags. Then a switch turned in my mind and I learned to love the place I am in – which is now one of my mottos."

Meet the needs of your employees

Safaei said in deciding the organisational structure you have to meet the needs of the people who work there. "You have to connect the structure with the human element and give people room to develop and exercise a level of freedom. If the structure is too rigid, it will not work. Freedom is the most cherished human value. We die gradually if we don’t like the place where we work. That freedom is very important."

According to Safaei one of the traits of a good leader is that they respect their own time. "It is said of Elon Musk (CEO of Tesla and since this week richest man in the world) that if a meeting is not up to his standard, he will get up and leave. You might say that is disrespectful, but that is how leaders think: they respect their time. It is the most expensive asset in anyone's life."

The ability to communicate well is also seen as a premium leadership quality. "You need to talk to people in a way and in a language that they understand and you have to be an inspiring speaker." He also said that for a company to be successful it either has to fulfil a need or satisfy a desire – like in the way Netflix satisfies people's desire for entertainment.

Drawn out for an opinion on the current debate of whether social media companies like Twitter and Facebook did right by banning outgoing US president Donald Trump from their platforms, Safaei said the reasons behind the decision are "probably 100 times more complex than what you or I think". Nonetheless, he said Trump contributed immensely to the growth in popularity of social media platforms like Twitter. "Trump used Twitter to hire and fire people, make statements, speak directly to his followers – thanks to him, Twitter became a more mature and legit source of information."

Safaei is the author of First Class Leadership and Your Journey to Fulfillment.