Students' Interest in Climate Change and Politics Rises after Game 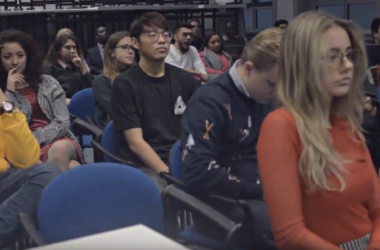 More than 76% of undergraduate students from WUAS who took part in the MIT World Climate Simulation Game last month say the exercise changed their views on climate change, with almost 80% now seeing it as a serious problem and the majority (76%) believing they will suffer the consequences in their own lifetimes.

The role-playing exercise simulates UN climate change negotiations and 140 students from 80 different nationalities participated, representing the regions of the world they come from. Participants took on the roles of delegates and were charged with reaching an agreement to limit global warming to no more than 2 degrees Celsius.

Wittenborg is only the 3rd institute in the Netherlands to play the game, which was created by the Massachusetts Institute of Technology (MIT). The idea is to create awareness among students and help them understand the dynamics at play on a world stage like the UN.

The feedback from students confirmed that this mission was successful at Wittenborg. Two-thirds of students (65.9%) admitted that before the project they knew very little about climate change and global warming. Now, 99% say they either have a better understanding of the issues at hand or “know a lot more”.

Some vowed to take action to reduce their own ecological footprints. This includes eating less meat, reducing the use of plastic, plant a garden, reduce dependence on non-renewable energy sources, taking trains instead of planes, installing solar panels and opting for an electric car.

Students also used the opportunity to reflect on the skills they gained during the exercise and the ability to work as part of a team – improving their own public speaking skills was high on many a wish list.

One student wrote: “I would like to improve my ability to ask for changes. I find myself not being able to ask for certain changes confidently.”

Another warned: “I am going to keep taking charge if no one else volunteers to do so, and do the work regardless of my teammates’ motivation to do the same.”

Other goals included “being more diplomatic”, working on “negotiation skills” and “becoming more flexible” in dealing with others. For some there were pleasant realisations about their own abilities. “I was surprised that I could be a leader,” one wrote.

The majority of students (91%) believe climate change is caused by mankind, but are optimistic that we will succeed, or might succeed, in limiting global warming to less than 2 degrees Celsius. However, one student vowed to “keep a negative attitude in case I am disappointed in humans".

More than 80% of students said they will continue taking an interest in climate change after the project, while 74% believe it has also raised their interest in politics.