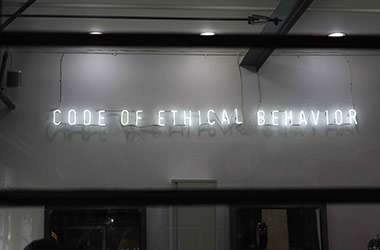 Many years ago, I worked in a company where the employees needed to key in their ID numbers into a clock-in machine to register their arrival and departure times at work.  It was an easy and accurate system to monitor staff attendance and tardiness.  An office clerk would then print out a daily report and submit to the supervisor for acknowledgment.  On one of the days, this clerk noticed a female employee, let’s say Jane, clocking into the machine twice.  She didn’t think anything of it until she saw the same thing happened every day.  She decided to do a check on all the print-outs from previous weeks and noticed that Jane’s name always appeared with another employee’s name, let’s say Sarah, and the clock-in times for both of them were always a few seconds apart.  She informed the supervisor about the irregularities.  After investigations, it was found that Jane had been clocking in on behalf of Sarah, who was unable to arrive at work on time due to child-minding issues.

'Ethics’ refers to a set of moral principles.  It is the discipline dealing with what is right and what is wrong, or what is good and what is bad. Ethics issues have always been top discussions in colleges and in the corporate world.  In recent years, we have seen and read many ethical failures and scandals that have plagued big companies.  Examples include the 2001 Enron scandal of manipulating accounts to make it appear profitable, although it was actually on the brink of bankruptcy, or Facebook’s harvesting of data from millions of Facebook users in 2013, or Volkswagen’s emissions scandal in 2015, and the recent scandal of Uber’s rampant sexism and bureaucratic failures in 2017, not to mention dozens of cases of sexual harassment charges against its drivers.

Many of the board of directors of these companies tried to pin the blame on a few bad apples in the companies, and few involved only one guilty person.  The decision to commit the crime is always made by a group of people, or is always in the knowledge of top management.  In the case of Uber, it’s about failure to act on its drivers despite many complaints from customers.

So why do people do bad things or why do organisations condone or encourage such behaviour?  It’s complicated, actually, especially if you are working or studying in an environment where competition is stiff, and survival is all about performance and being ahead of others.  There are three factors that, when combined, determine the ethical choices a person makes:

Bad apples:  This term refers to those people who are inclined to make unethical choices.  They are, for example, employees who will do anything the leader tells them to do, even unethical directives, so as to gain personal advantage, or they do it to avoid punishment or dismissal.  These people bring to their jobs their own ideas of what is morally right and wrong.  They don’t use their highest cognitive level based on morality and don’t think through the implications of their decisions.

Bad cases: These are ethical situations that are "ripe for ethical issues".  Some people take the easy way out, not realising that it may cause repercussions.  Some people tell small lies to cover mistakes and ultimately graduate to larger lies to cover all the other lies.  Employees who are caught doing this often blame it on the situation or circumstance or the peer group.  The opening story above is an example of a bad case.

Bad barrels: This is a situation whereby the company environments foster or condone unethical behaviour.  Studies have found that some companies encourage toxic social environments for the purpose of financial gain.  These types of companies usually promote individualistic behaviour in an “everyone for themselves” culture.

It is important for us to know what makes up ethical behavior at school and at work.  We are involved in ethical issues every day, not knowing that they are just like the scenario mentioned above.  In college you may have helped your friend to write a report as a favour or signed the attendance sheet for him/her even though he/she is not present.  At work, your manager may have urged you to purchase low-quality materials so as to cut costs, although this will affect the quality of the final output.  Unethical behaviour will also be prevalent when employees feel that their actions are harmless and will not raise an eyebrow.

The key to making sure that you are on safe ground is always to be conscious of the decisions you make.  The end does not justify the means.  Just because you want your friend to pass his exams, or you don’t want to lose his friendship, does not mean that you should write his exam essay for him.  Just because you are afraid of getting a bad performance evaluation, you need not succumb and do anything your superior tells you to do.  Companies or organisations that promote a strong ethical culture with clear communication of what is morally acceptable and unacceptable conduct suffer fewer ethical issues.  It only takes one corrupt manager or one corrupt professor to cause a huge lawsuit against a company or organisation.

Companies and institutions need to create more ethical environments by reducing job- or stress-related situations, by instituting policies and codes and enforcing the rules, encouraging honesty and ‘whistleblowers’, and using rewards to encourage positive behaviour.  An honest culture should also be fostered, and employees should be encouraged not to be afraid to admit failure or to contradict superiors.  Morality is a personal issue.  Do not let your superiors or friends bully you into committing something fraudulent.  Do not follow what people tell you to do unless you check with your conscience and moral values.  Just remember, money, position and status are not worth sacrificing your morality and soul.