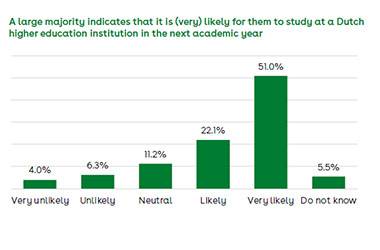 Survey: COVID-19 Not Diminished Interest in Studying in Netherlands

Interest in studying in the Netherlands has not waned despite the COVID-19 pandemic, a new study from Nuffic, the Dutch organisation for internationalisation in education, has shown. The quality offered by the Dutch education system is the biggest drawcard for international students. Nuffic surveyed more than 500 prospective students in March about their plans to come and study in the Netherlands.

The decisive factor is the quality of education: for almost nine out of ten students, this is an important reason to come to the Netherlands. No less than 87.2% of respondents indicated that this factor makes them more likely to choose the Netherlands. 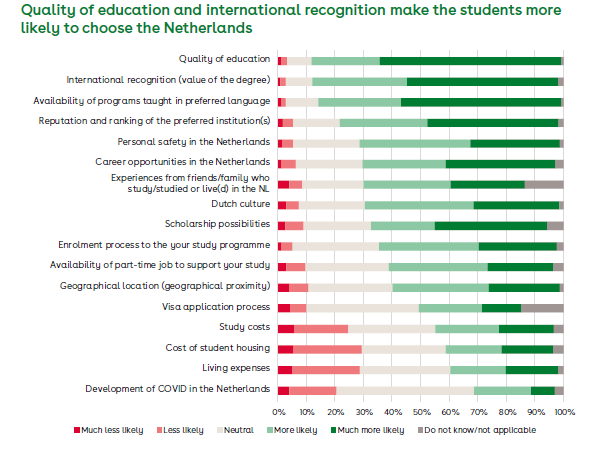 In fact, the top 4 factors motivating students to come and study in the Netherlands are all related to education, programmes and the Dutch Higher Education Institutions (HEI).  The other three factors are international recognition (value of the degree), availability of programmes taught in preferred language (84.8%) and reputation and ranking of the preferred institution(s) (76.4%).

Another topic that often comes up is Dutch culture, according to the Nuffic report. "Some 25% of the prospective students identify the Dutch culture as a factor that makes it more likely for them to study in the Netherlands. For example, the large international and multicultural community, the open-mindedness, the acceptance and safety for the LGBTQ+ community and quality of life are mentioned several times."

While a large majority (73%) of respondents indicated that it is (very) likely that they will study at a Dutch HEI in the coming academic year, almost half (45.6%) are less inclined to apply here if their classes would be mostly online next year.

Respondents from the European Economic Area (EEA) more often indicate that it is (very) likely for them to study at a Dutch HEI in the coming academic year (86.1%) than non-EEA students do (72.6%). Most respondents (62.7%) have already submitted their applications to a Dutch research university or university of applied sciences to start in September.

Participants were also quizzed about their concerns in terms of studying in the Netherlands.
Almost 8 out of 10 students seem most worried about travel restrictions. "This could be explained by the negative travel advice, as well as the measures one must take in order to travel to the Netherlands, such as showing a recent negative test result and going into quarantine after arrival," the report reads.

Some 70% of the students are also worried about the mode of instruction they will receive, meaning online, on-campus or a hybrid of the two. Another topic prospective students worry about is finance, more specifically the personal income opportunities (67.6%) and scholarship possibilities (67.1%). Students seem least worried about admission conditions (40.7%) and visa procedures (44.6%).