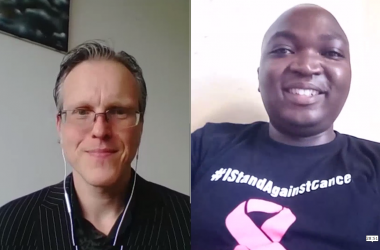 While many business owners served their staff with unpaid leave notices when COVID-19 pandemic struck, Jeremiah Kahindo stood his ground and proved how his two businesses were able to surmount this period of shock and uncertainty without laying off any of his workers.

Kahindo, from Kenya, owns 2 companies: Stag Credit, which provides funding for small and medium micro-enterprises, and another company dealing with household detergents. Having been invited to partake in a series of Project Week interviews for Wittenborg’s Project Week Kick-Off in June, Kahindo was interviewed by Wittenborg’s senior lecturer Andreas Ooijer. It was an inspirational interview where Kahindo shared many of his thoughts and out-of-the-box business strategies, which had helped his companies to stay above water despite poor sales and gloomy business prospects.

Just like any other businesses, both his companies suffered huge revenue declines during the pandemic and he had to rely on previous years' financial profits to survive. His directors pushed him to start laying off workers, but Kahindo refused and said, "Loyalty is a two-way traffic". Businesses often expect their employees to stay loyal to them, in times of rain or shine, so they should also show loyalty to their employees and be there with them during this tribulation.

When asked how he managed to keep his companies viable, Kahindo said that he had to modify his business strategies and adopt new ways of doing business and managing his employees. Having employees working from home proves a challenge and he has to come up with new systems and renegotiate new contracts to evaluate their performance at home and compensate them based on their output.

He also said that another good thing that has emerged out of this global crisis is the concept of the gig economy - it will become the new normal. He has advised his employees, as well as his community, not to let this crisis overwhelm them. He encourages them to take on different roles, try different jobs and engage in multi-tasking or doing multiple jobs at one time. Senior lecturer Ooijer agreed with him and said that freelancing and project-based jobs, which is what the gig economy is all about, are also very common in the Netherlands, but require a fair amount of flexibility. When asked what his opinion is on the required mindset to successfully participate in the gig economy, Kahindo replied that it is indeed a culture shock and the only way to change people’s mindset is to take it slowly and give them time to adapt and accommodate to this new normal.

The interview also revealed that Kahindo has a people-oriented personal management style. Despite having to deal with many critical business and financial issues, Kahindo always puts aside time for his employees. Not only has he organised some formal online trainings for his employees, but he has also engaged professional psychologists to talk to them via online meetings and help them overcome this trying period. He even encourages them to be entrepreneurial and start their own businesses without fear.

When asked if he agrees with the classical view that entrepreneurs are risk takers and that "you’re either born as an entrepreneur or you are not", Kahindo cited a famous quote: "Hard work beats talent". Kahindo said that where he comes from, society believes that once you finish education, you are meant to be employed. But Kahindo opines that education is not all about employment. It is about having the ability to seek opportunities and derive solutions to solve the many problems that are plaguing people around the world - that is being entrepreneurial - making money by solving other people’s problems. To him, no doubt there are born talented entrepreneurs, but there are also ‘made’ entrepreneurs - people who work hard and allow their zeal to drive the entrepreneurship in them.

"Blessed Are the Flexible"

Kahindo believes that shutting down businesses or laying off workers due to the pandemic is not a solution but will lead to many negative ripple effects. He said that the pandemic is already here and it may be with us for many more years, but life has to go on and what we need right now are new ways of doing things. "Blessed are the flexible" quoted Kahindo and said that only the brave and the flexible will be able to survive. “If you are flexible, you will never be bent out of shape”, he added.

Having faced many setbacks and failures during his early life, Kahindo has learned not to depend on people to survive. "Hard work, optimism, ambitiousness and flexibility can help us to face our adversities in life", said Kahindo. As a concluding remark, Kahindo reminded students that there is a difference between what they learn and what they will experience in life. What they learn from the books now is never useless, but will definitely become useful to them in their future lives one way or another, as it did for him.