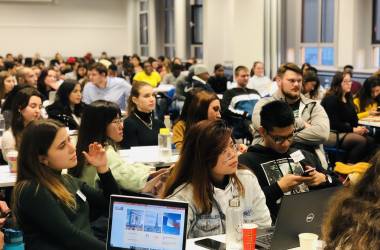 Project Week (PW) is an integral part of the Wittenborg experience, which seeks to contribute to students’ personal development and knowledge - not only about business issues but also current global concerns.  A good example of this was when Wittenborg recently hosted a Model United Nations Assembly where students debated world issues for 3 days. Their feedback was overwhelmingly positive as they got to experience what it is like to represent countries on an international level.

Having been a teacher myself for more than 15 years, I know very well how students hate the rhetorical way of teaching and learning. The old-school model of passive learning of facts and regurgitating them out of context no longer feels in step with the students of today’s world.

Diversity the Zeitgeist for Modern Youngsters

Working in teams with diverse nationalities, as well as brainstorming ideas and solving highly complex problems, has become the zeitgeist for our modern youngsters and future employees. German student, Robert Freytag, said he prefers this way of learning and especially likes the UN simulation model.

With rampant problems and challenging issues that have proliferated in many, if not all countries in the world, it is not surprising that Wittenborg chose the topic of “Model United Nations at Wittenborg – Ethics in Business, Politics and Governance” as the final Project Week of the year for undergraduates.  Working in teams representing 21 different countries, students were tasked to research, discuss, synthesise information and brainstorm ideas on how to solve real-world problems such as money laundering, government and corporate corruption, regulation of social media and banking systems, as well as corporate interference in national politics. Thinking out of the box, many groups took the initiative and focused on other critical issues, such as human and women’s rights’ violations, healthcare, climate change, economic sanctions, gender inequality, ageing population, pollution and water shortage. Although Andreas Papadopoulos from the Czech Republic finds the topics a little bit overused, Iranian Elham Arefi feels the topics are different, yet interesting and relevant to her own course specialisation.

PW offers students the platform to develop the sensibility - the ability to sense and be sensitive - to the issues pertaining to countries around them. Sensibility is important in our lives as it provides us with an acute awareness about things that are going on around us. Making students realise the many problems the world is facing, on a national or global level, and making them realise that they can be part of the solution and not the problem, is really crucial, and is the very core of education in the 21st century. Stuart Benson from South Africa echoed this view and said that it is really good to get inputs from the younger generation about relevant and current issues impacting the world today. In this way, the younger generation would feel that the responsibility of making the world a better place to live in, is not in the hands of a separate group of people but could actually be in their own hands.

It was heart-warming to see representatives from different countries speak eloquently and confidently in front of the whole assembly, defending their position papers and proposed suggestions. Unperturbed by the bombardment of questions by both students and lecturers, the "delegates" graciously and diplomatically rebuffed or clarified the questions posed to them. Although the topics discussed were difficult and complex, the atmosphere at the hall was high-spirited and energetic with a touch of humour from both students and the chair of Wittenborg, Peter Birdsall. In the words of Benson: “It was lots of fun and there was 120% active participation from students”.

Most of the students interviewed applauded the concept of PW and believed that it has equipped them with lots of new knowledge, such as creating poster presentations, manifestos and writing position papers. Students also learn the importance of active participation in caucuses as well as other skills like negotiation and diplomacy. Commenting on the diversity of the group members, Sri Lankan student Kavinga said that she found no difficulty in working together with the other members, and even found it refreshing as she got different perspectives from each student about a particular subject matter. She believes she has learnt how to communicate better and acknowledges the importance of good leadership when working in teams. This notion was supported by Linh from Vietnam, who said that it is good to work in a team where members do not know each other, because then they have to learn how to communicate with strangers and how to work in random teams or projects.

Andreas Papadopoulos interpolated that "patience" is one of the key factors when working in teams; he said he had to maintain patience when dealing with fellow members who have different cultural habits and characters, patience in trying to resolve issues that crop up during discussion and patience in going through the long PW process. Learning good communication between different nationalities, according to Jade, is really imperative for her as she is pursuing a career path in the hospitality sector

To sum up, it would be fair to say that the PW was a huge success in getting active participation from students and in learning the important skills that would benefit them in their future careers. More importantly, they have learnt how the UN works, the many challenges that afflict other countries and the complexities of resolving those challenges. Hopefully too, students now understand the reasons why many countries are often at loggerheads with each other and also why international relations are so important to maintaining peace and harmony in the world.