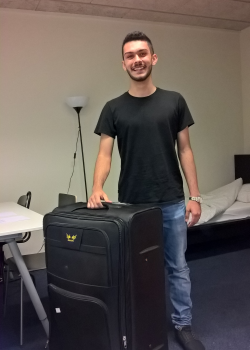 While many Dutch universities are increasingly struggling to house incoming international students, no such problems exist at WUAS, having recently added even more accommodation to its growing housing portfolio.

As the new academic year kicked off, the acute shortages at Dutch institutions has been widely reported (and criticised) in the media – especially in cities such as Groningen and Amsterdam where institutions have even been forced to resort to emergency measures, like putting students in tents and asking staff to room them.

In contrast, Wittenborg has its international student housing system well under control despite growing student numbers. In fact, in Apeldoorn where its main campus is located, it has just added three more apartments to its housing portfolio this year – in Cort van der Lindenstraat, Lekstraat and Schaperstraat.

This brings the university's total number of properties to 8 after it acquired a former office building in De Ruyterstraat in the heart of Apeldoorn last year, transforming it into spacious student accommodation. Wittenborg is expecting its student numbers to top 850 by the end of the year.

Unlike many institutions in the Netherlands, Wittenborg provides all its international students with accommodation for the first few months upon arrival to make sure they are not stranded.

Wittenborg CEO Maggie Feng said: “I don’t think universities should accept international students if they cannot guarantee that those students have accommodation for at least the first 4 to 5 months after arriving.

“They should put themselves in the shoes of the parents who want to be sure that when their child arrives, after a 20-hour flight from, say, Australia, they have a comfortable, clean place to sleep.”

Feng also pointed to what she calls a “mentality” problem in catering for international students. “What you need is a service-mentality. In other words, putting your client – in this case the student – first. When students from other countries arrive, you have to give them the time and orientation to adjust to their new country, so that they learn how things are done in the Netherlands – for instance, how waste is sorted or where to find things they need.”