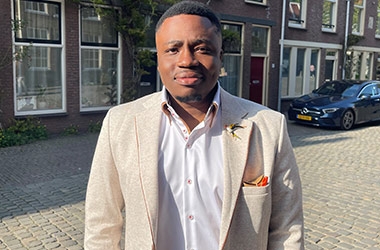 Having previously worked as a Robotics Process Automation (RPA) developer in a Nigerian bank, Wittenborg student Ibukun Babafemi decided to connect his background to theory by writing an MBA thesis on the adoption of RPA by Nigerian financial institutions.

Babafemi, who recently completed a degree in International Management, stresses that digital transformation is a reality for organisations of all sectors, adding that researchers need to analyse these processes, including those taking place in developing countries. “The adoption of information technologies in developing countries has different dynamics because it is influenced by factors such as high unemployment rates and poor internet facilities, just to mention a few. How then does an organisation implement a technology like Robotics Process Automation that requires efficient internet services and would likely increase the unemployment rates? These are some of the interesting aspects researchers can shed more light on.”

To conduct his investigation, the student made use of qualitative methods, interviewing prominent RPA stakeholders active in Nigerian banks. In total, the thesis analyses eight cases, out of which four concern banks that had tested RPA solutions and went on to implement them, while the other four institutions had either scaled back or were yet to implement these resources.

According to Babafemi, while there is a clear indication that Nigerian banks have been implementing Robotics Process Automation technologies, the adoption levels differ among these institutions, due to technological, organisational and environmental factors. The study concludes that, from a technological perspective, the main drivers for adoption are compatibility, affordability, relative advantage and complexity. Multiple organisational factors also influence these processes, including structure and culture, top management support, financial resources and change management implementation.

“On top of that, organisations also have to deal with environmental drivers that include competitive pressure, government regulations and media attention, as well as vendor and implementation partners’ support. One of this study’s most relevant findings is that establishing a Centre of Excellence (COE) to coordinate activities is essential for the implementation of RPA. The thesis also highlights that, currently, Nigerian banks possess a low maturity level when it comes to Robotics Process Automation,” Babafemi points out.

Asked about his future plans, the graduate says that his end goal is to become a top data scientist and have his own consultancy firm. “But now that I have just completed my MBA, I intend to combine my strong background in IT with my newly acquired business management skills to secure an exciting role in the Netherlands.”