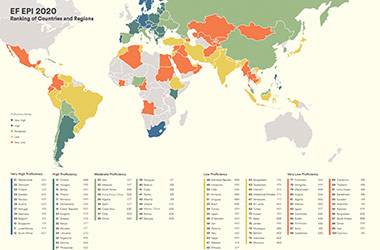 The Netherlands has topped the EF English Proficiency Index of 2020, making it the country with the best English language skills outside the native English-speaking world. More than 2.2 million people took the test and 100 countries worldwide were ranked. The Netherlands has consistently been in the Top 3 since the Index started in 2011, often occupying the top position. The Top 5 are the Netherlands, Denmark, Finland, Sweden and Norway. The countries with the highest scores outside Europe are South Africa and Singapore.

The report correlates English proficiency with innovation, saying the two go "hand in hand". It also believes that technology spreads English. "Technology-enabled distance education could one day allow anyone to learn English for a competitive price, wherever they are. While that potential has not yet been fully realised, we’ve found consistent correlations between English proficiency and measures of technology adoption, such as secure servers per capita, information and communication technology (ICT) exports, and broadband subscriptions. Access to English-language media speeds up many people’s learning process too. 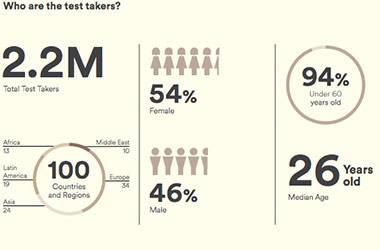 "English is the principal language of international collaboration, and as in previous editions of the report, we found correlations between English and various measures of investment in research and development (R&D). This finding resonates with recent research showing that companies with managers from many countries earn more revenue from innovation than their less diverse competitors. English-speaking teams are able to attract more diverse talent and access ideas from around the world. They are also more likely to collaborate internationally within their own organisations."

The report also states that good English skills are more likely to get you noticed. "The days of individual labs working on their own is coming to an end, and leveraging the resources of teams in different labs is often a requirement for funding. Papers published in English are much more likely to be cited than those published in another language. In November 2018, The Economist reported that bonuses for Chinese scientists who get a paper published in Nature were as high as $165,000," (€136,101).

Left out of the party

The report also warns that people with lower levels of English in multinational teams might feel left out. "Businesses today operate with high levels of collaboration, with flat, non-hierarchical structures and dedicated tools for internal networking. These innovations aim to make companies more agile, more innovative, and fairer. But our data shows that some parts of organisations have not been invited to the party. People in operations, clerical, and technician roles have, on average, much lower levels of English proficiency than their co-workers. This gap prevents them from being productive members of multinational teams, and it limits their career prospects.

"Recent research by the McKinsey Global Institute finds that nearly two-thirds of jobs include a substantial share of tasks that could be automated, based on current technology. When the job market shrinks, people who lose their jobs need opportunities to pivot to new positions. If their English skills are lacking, that transition will prove challenging."

Despite major investments in English education, in both the private and public sectors, the average English proficiency score in Asia has remained stable for the past five years. China’s rising proficiency, however, counterbalances declines in other countries.

"China’s focus has shifted to developing a world class scientific community and cultivating soft power abroad. Recognising that English proficiency is key to meeting those objectives, China has expanded English instruction to schools across the country, transitioned from memorisation-driven to communication-driven teaching, reformed the national assessment tool, incentivised foreign-educated Chinese talent to return home, and invested in transforming its leading universities into world-class research institutions that publish in top English-language journals. Few political leaders can exercise this kind of long-term planning and control over their countries, but the pillars of China’s strategy offer a replicable model for how policy reform and targeted investment can raise a country’s English proficiency level."