Cooperation, not Competition, is Future of HE in Holland Skip to main content

Cooperation, not Competition, is Future of HE in Holland 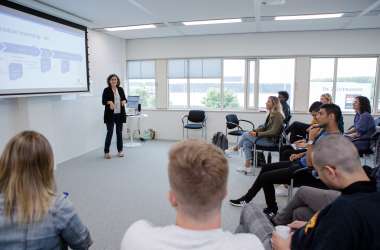 Under pressure from the populist right and facing shrinking budgets, Dutch universities are not having a stellar moment. What does this mean for the future of internationalism in the Netherlands and institutions like WUAS with its high number of foreign students and where the entire curriculum is taught in English? Can it withstand the pressure from the right?

Wittenborg’s Vice President of Corporate Affairs, Dr Jan-Albert Dop, believes instead of competing, institutions like Wittenborg should seek cooperation both in the Netherlands and abroad. He refers to the Van Rijn Commission’s long-awaited report which says that financial incentives in universities are undermining quality and creating unnecessary and unwanted competition. “It supports the need to strengthen research in HBO (universities of applied sciences) with a clear emphasis on master's degrees.”

British education weekly Times Higher Education (THE) recently explored some of these questions in an article which warns that declining funds and the Dutch time-honored embrace of internationalism could be on a “collision course” with the populist right, such as the anti-multiculturalism FvD – led by Thierry Baudet – who recently won the largest share of votes in the Dutch provincial elections.

In his victory speech, Baudet said among other things that Dutch society is “being undermined by our universities”, leading to the Dutch minister of Higher Education, Ingrid van Engelshoven, tweeting: “We have to protect academic freedom, not make it suspect.”

However, concern about English eventually dominating the Dutch education sector has been simmering for some time. According to THE, in 2017 there were 48,507 international students in the Netherlands, equating to 17.5% of all university students. At master’s level, 71% of students were taught entirely in English, while about 30% of undergraduates were taught solely in English.

The government responded to the growing criticism over the use of English by proposing changes to the Higher Education Act, which will require institutions like Wittenborg to maintain a strict policy justifying their choice to teach in English rather than Dutch. Wittenborg wishes private institutions to be exempted from the amendments, saying: “Although WUAS is a higher education entity recognised under Dutch law, and its programmes are accredited (in English) by the NVAO, it is a private organisation. It should not be obliged to maintain a policy regarding teaching in English, just as it does not maintain a policy guaranteeing that it will not operate and teach in Dutch.”

THE also quotes Martin Paul, president of Maastricht University, who called the debate about English “a fake discussion”. He argues it is not about teaching, but about a “general societal worry that the threat comes from outside, and that internationalisation/globalisation is the threat” – even though international companies based in the Netherlands need staff with good English, and there are vacancies in Dutch science and engineering companies that can only be filled by overseas graduates.

Dop believes this is a chance for institutions like Wittenborg to show “who we are” and what value internationalisation holds for the Netherlands. “For us it means seeking cooperation - rather than competition – in the Netherlands and abroad, based on our distinctly international, English-langueage character."