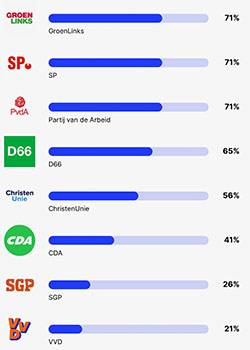 Finding a Balance in the Dutch Election 2021

By Peter Birdsall, President of Wittenborg University of Applied Sciences

This week will see the Netherlands' general election taking place, with voting spread over three days due to COVID19 and the result being known sometime Wednesday night. This time around, the election campaigns have been relatively 'mild' with debates held in the assumption that not much will change. That’s always a dangerous place to be in election terms, as apathy can be democracy's greatest enemy.

I can't vote in the Netherlands, which is actually my own choice. After living, working and running businesses in this country for over 30 years, getting a Dutch passport wouldn't be too difficult; however, 'they' don't like double passport holders here, and I do like my British and Swiss ones!

Notwithstanding that, government and politics is immensely important for Wittenborg, as we are affected by changes in (higher) education policy, approaches to internationalisation, as well as immigration and social welfare policies to name but a few areas. For that reason, Wittenborg actively involves itself in discussions about higher education policy and development.

Another aspect to the electoral discussion is one of the 'coffee room' at Wittenborg. Many of my international colleagues (we have a lot at Wittenborg) have chosen to adopt their new fatherland and take Dutch citizenship and are, therefore, able to vote this year. Many of our graduates also stay to live and work in the Netherlands, and gain Dutch nationality. The discussions and my colleagues' views are interesting, as is the difficulty everyone seemingly has to 'work out' who to vote for in an increasingly disparate electoral landscape with 37 'parties' to choose from.

With this interest in mind, I decided to work out who to vote for this year, if I could. Following Dutch politics, with Wittenborg's interests in mind, means that I have a fairly good overview of the mainstream parties who have been involved in government in recent years; however, I was interested to know what would happen if I voted with my heart and not with my responsibility.

To do this, I used the 'voting guide' - an online tool called 'Stemwijzer'. The tool (that operates in Dutch only) gives you a result that shows, in a percentage, how close you are to the manifesto and ideals of each party. There are questions regarding social housing, health insurance and farming, as well as about the European Union, immigration and even whether or not fireworks should again be allowed (they were banned during the pandemic). Before you get the results you can go deeper into certain issues and finally you can choose which parties will be included (or excluded) in your result.

I excluded all the small and the 'weirdo' parties (yes even Holland has those), and of course the discriminatory and xenophobic party of 'freedom' (PVV) and the openly racist party FVD (no one at Wittenborg could or would ever vote for these parties as they are completely incompatible with what we stand for and what we do).

When I got my result it showed that my top three 'party choices', all with 71% similarity to my political views, according to the answers I gave in the voting guide, represented the mainstream of socialist parties in the Netherlands. My 'number 4' party (meeting my needs by 65%) was Democrats 66 (D66), a party that I have always admired since arriving in the Netherlands in 1988, not least because it is the same age as me. 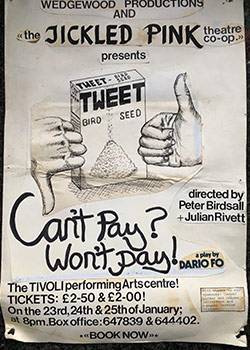 My result may surprise some people; however, it didn't surprise me, and it demonstrated to me that my own perception of how society should behave, function and be managed hasn't changed much since I started my first company, at the age of 17 (the Tickled Pink Theatre Company). One of our favourite playwrights at the time was the Italian Dario Fo, and after producing his best-known play, Accidental Death of an Anarchist, we went on with performing and touring 'Can't Pay, Won't Pay' a Marxist political farce that also was seen as a feminist left-wing statement. Producing Can't Pay Won't Pay in 1985, as a profit-share theatre company was one of my most defining moments in the early stages of my career.

Back to reality, and I realise that the chances are extremely high that the Dutch voters will re-elect their current prime minister Mark Rutte and his VVD party (People's Party for Freedom and Democracy) to lead for a fourth term. Many people say that he is profiting from the COVID19 pandemic because people don't want great change at a time like this. This might be true; however, I believe the voter is more cautious in 2021 than in previous years.

Dutch governments are formed according to the balance and majority the various parties can achieve in parliament, which accounts for 150 seats, and votes are counted proportionately (proportional representation). This means that even small parties can get one or two seats in parliament and because no party can ever get a majority big enough to govern alone, the largest party (most number of seats) will always have to form a coalition with other parties. The voting and political system in the Netherlands is explained well, and in English, by Dutch News.

So, in a nutshell, this election could see the Dutch voting to keep the status quo of the current Rutte formation - his VVD party together with CDA (Christian Democrats), D66 (Democrats 66) and the smaller Christian Union. Now, although for any business the short-term financial advantages of a more right-wing party like VVD and CDA, are clear, issues such as social development, better education and especially the environment and dealing with climate change will dominate the coming decennia. Looking at this scenario, I think we need a party to balance the ideas of Mark Rutte, and the influences from the right-wing side of his party. We also desperately need a woman who is closer to the top of the decision making pyramid.

For that reason, if I could vote, and I can't vote and I won't vote, but if.., then I would choose D66 led by Sigrid Kaag.