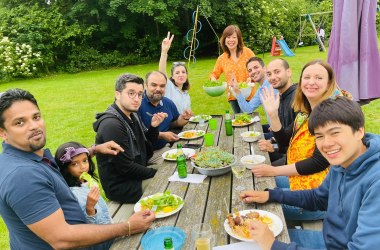 A group of Wittenborg staff members, as well as their partners and children, had the opportunity to share typical dishes from their own countries, learn more about other cultures and indulge in a warm and friendly atmosphere on 10 June. Attended by approximately 40 people, the Staff Cooking Event took place at De Aze, a country-style venue located in Terwolde with a large and well-equipped kitchen. While some participants prepared their dishes during the party, demonstrating their culinary skills, others chose to bring them ready made. The menu offered a variety of options, with different kinds of spices, ingredients and flavours.

According to Wittenborg Head of School of Business Rauf Abdul, the Staff Cooking Event was a fun activity that enabled staff members and their families to meet in an informal setting, and also a great way to promote team building. “I brought Beef Nihari, a traditional Pakistani dish that had been cooked mainly by my wife. I loved all the dishes I tasted, because I enjoy eating all sorts of food, and the event featured an amazing and very diverse international buffet. On top of that, it was really nice to meet other families, especially the children. It was lovely to see all the kids playing together as if they had known each other for a long time.”

Assurance of Learning Manager Kriszta Kaspers-Rostas took the chance to prepare the famous Hungarian goulash during the event, stressing that the real dish is very different from the canned version that people find in Dutch supermarkets. “The Staff Cooking Event is always a tasty experience, and what I like the most about it is that we can cook our favourite meals for each other. On the one hand, I chose goulash because I wanted to show people what it really tastes like, but I also decided to do it because it had been a success the last time we had held the cooking event. My favourite dish this year was Sophia’s chicken with pomegranate sauce, it was simply delicious,” she underlined.

ICT Administrator Yasir Khan said that the event was very well-organised and participants really enjoyed the variety of cuisines represented there. “It was a very nice way to socialise and learn more about each other. I prepared two South Asian dishes, Chicken Karahi and Dahi Bhalay, which is a salad. Something interesting I have learned is that some dishes that I believed to be typically South Asian are equally popular in other parts of the world, and I also discovered very good vegetarian recipes.”

Lecturer & Process Tutor Mariví Martinez Brocca pointed out that she really enjoyed the relaxing atmosphere. “The place was amazing! I liked being at a farm with such a peaceful view of the horses and a lot of space where the children could play. Plus, we could sit informally at different tables and so I had the opportunity to change tables and chat with colleagues that I usually see in a rush.”

According to Support Office & External Relations Coordinator Sophia Faraji, who organised the activity, the Staff Cooking Event was a great opportunity for cultural exchange. “By tasting various foods, we were able to learn more about each other’s cultures and backgrounds. When you share a meal, you share your traditions and practices with others, opening their eyes to aspects of your culture they may not have known about before,” she stressed. 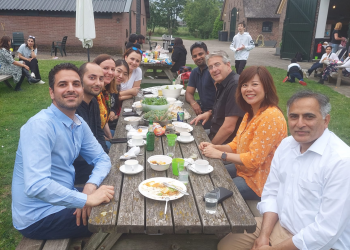 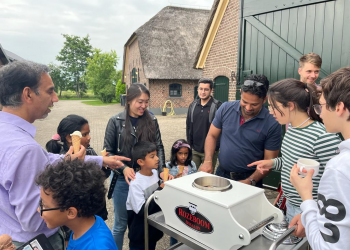