WUAS will celebrate its 25th Anniversary with a Gala to be held on November 9th 2012 in Apeldoorn.

The Gala will be the final event during a week in which students, staff, and partners from business, education and the professional field will be invited to take part in a number of special events, seminars and workshops.

Wittenborg was opened by Mayor of Deventer, C.J.D Waal on 21st September 1987 at its then location on the Pikeursbaan in Deventer. It was first called Wittenborg InterCollege, however soon dropped the 'Inter' part of the name, keeping just Wittenborg College. From 1996, once it received its state appointment as a University of Applied Sciences it was officially called Hogeschool Wittenborg, and since 2007 the University has gradually been changing its name in all publications to WUAS. 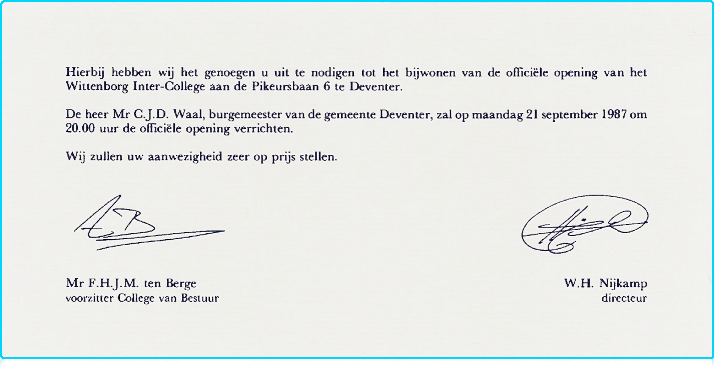 In the early years the Wittenborg offered short courses and business to business programmes, in areas such as Marketing, ICT, and Communication. It also offred language courses in English. Wittenborg started to offer short degree courses in the 1990's and full Bachelor programmes since 1996, when it received its University of Applied Sciences status. Although Wittenborg has been offering full English taught degree programmes only since 2002, Wittenborg International was already offering courses in 1999 in cooperation with partners in Poland.

The 25th Anniversary celebrations come after a time during which WUAS has become an institute with a strong international profile while having significantly changed its appearance, location, and expanded its Bachelor and Master programmes through a long term partnership with the University of Brighton. It is intended that the festivities will reflect the current student body and the institute's partnerships, whilst looking back at the past acheivements and its students and forward to developing programmes and future growth.

During the 25 Year celebration week, an important event to be organized will be an employment and career market that aims to introduce employers to the benefits of involving dutch and international students in their companies and organisations.