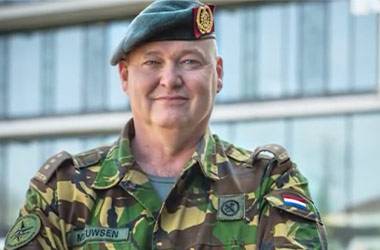 Warns about Use of IT, but also Dangers of Fake Information

Students from WUAS recently had the privilege of attending a guest lecture from the Director of NATO's Command and Control Centre of Excellence in Utrecht, Colonel Robert Meeuwsen. Meeuwsen addressed the question of organisational management from within the context of the military, bringing forth perspectives which differ from that of the corporate sector. He has 35 years of active duty under his belt.

Meeuwsen highlighted three military principles which he said might be helpful to students for the rest of their working, practical lives. He reminded students that the world is not flat. "Technology gives us access to new dimensions. First there were two dimensions – land and sea, which gave us ships.  Then the third dimension was added, which is aircraft, followed by space and cyber as new dimensions. This complicates our work, but we have no choice. If you don't think, plan and execute in the multi-domain you will become obsolete.

"The other two principles are that you have to be efficient and, finally, being aware of mission command. A local commander has the best situational awareness. Order him or her to reach a certain effect and let them decide how to reach that. This asks for a fundamental trust between commanders. "

Meeuwsen also spoke about improving performance by development and used his time in Afghanistan as Assessment Chief as an example.  "When I came in, I saw people were counting numbers in reports from all kinds of different organisations to manually determine whether authority in each district could be transferred to the Afghan government. It was about economic development, judicial service and security.

"I came up with an automated system to see how ready districts were – by using WebTask on the network as a tool to come up with a database. Replacing the manual with the automated system meant the outcomes were more precise and we could reduce the time spent on the task. That was an improvement of our cell by using IT and data."

Be Brave in Order to Improve

He encouraged students to "be brave" and not be afraid to recommend changes that will lead to improvements in their organisation. "First come up with an important subject. Don't bother if it's not an important subject. And to do so, you need courage. If you don't have courage, you won't step forward and share your ideas. And you need to know the mechanisms of your organisation – how processes influence each other. Not all processes are linear. Another factor is experimenting. To recommend something, you need proof. A strong showcase. To experiment you will need a sponsor. Not only to fund the means you need for experimentation but also to gain a platform on a higher organisational level to come up with your pitch in which you recommend your change. It also makes you less vulnerable."

IT - Be Aware of Fake Information

Meeuwsen also urged students to keep in mind that IT is an enabler, not an effect. "It supports the current way of working or a new way of working. IT enables you to handle the inclining complexity of your organisation and surrounding world. IT can also enlarge productivity per person. It can support or suggest improvement, but there is a danger: IT in itself is not smart. IT will help you improve your situational awareness, but be critical because there is a lot of fake information on the Internet and in the written press, so the validation of information becomes more important every day. ''