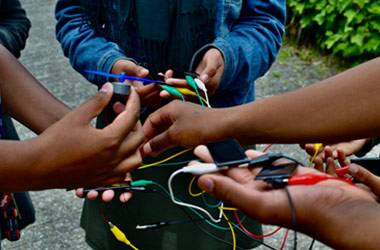 STEAM incorporates teamwork and collaboration to facilitate the creation of a product or object based on the understanding of a scientific concept. The researchers decided to test the effect of STEAM activities in the pilot programme on the participating pupils’ beliefs, perceptions and ambitions toward science and technology.

This current research constitutes a form of action research in which researchers by means of an interactive process of data collection, consultation and action try to implement a solution. The research is inspired by similar collaborations in the US where afterschool programmes work collaboratively with universities, private companies and governmental agencies to improve on their existing programmes.

The research team, in collaboration with a local tech entrepreneur developed the following themes for the pilot programme: programming robots, astronomy, green energy, artificial intelligence and cryptocurrency. The workshops began with a short theoretical lesson which included simple explanations of scientific concepts using visual aids, followed by an interactive session (approximately 1.5 hours) where teams of pupils worked collaboratively to complete an assignment that illustrated a scientific principle. Instructors walked around during the interactive sessions to offer one-on-one coaching to the teams. A member of the research team was present at all workshops to observe the level of engagement and the interaction between the pupils and instructors.

Throughout the workshops, pupils were exposed to robots, mini solar panels, turbines and the microbit, a mini computer developed by the BBC to help make programming courses accessible to school-age children. The microbit allows for simple programming commands to be dragged and dropped into an interface. In the first workshop, the pupils were asked to programme the robot using the microbit to avoid obstacles. All of the subsequent workshops included the robots doing various tasks that built on the knowledge of the first workshop and were connected to the aforementioned themes. Pupils would occasionally be asked to augment the robot by adding a compass or solar panel. The instructors used visual props to explain scientific concepts (i.e. locked chests and keys to explain asymmetrical encryption).

The pilot programme concluded in July with a site visit to a local social enterprise that converts old classic cars to electric vehicles. During the visit, the pupils were invited to pose questions to the engineers and demonstrate what they had learned in the workshops. There was consensus among the organisers that the pilot programme should be repeated in the fall to further evaluate the efficacy of the STEAM activities and their implementation into the homework support programme. This research will lay the groundwork for further exploration of Open Science Schooling (OSS) in Amsterdam Zuidoost.

Researchers believe that collaborations with private enterprises could be the key to supplementing afterschool programmes in neighborhoods where pupils lack education parity. The combination of industry-specific knowledge, local networks, community orientation and organisational practices can potentially accelerate the rate at which innovations in afterschool programming are incorporated into social policy.