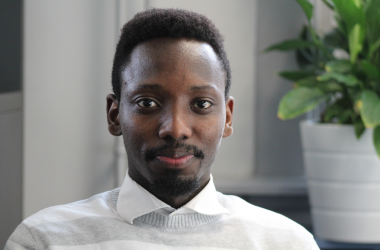 Musita recently started working for one of the top-ten logistics companies in the world, XPO Logistics. While still a student, he interned at leading Dutch fashion house Supertrash last year, and also worked at Wittenborg as an education assistant.

And if that’s not enough, Musita was the first student at Wittenborg to do two IBA specialisations almost simultaneously. He did an IBA (Bachelor) in Economics and Management, as well as an IBA in Logistics and International Trade, from which he graduated last month. Impressive for someone coming from a country that suffered heavily during the 1994 Rwandan Genocide. However, that is not something he dwells on, and he plans to return to the country at some later stage.

Alexis came to Wittenborg in October 2014 from his home in Kigali, Rwanda. “I chose Wittenborg because of the multiple entry dates, and the Netherlands because it provides quality degree programmes in English.”

After finishing most of his modules for one programme, he wrote to the exam board in 2016 to ask permission to do another programme, receiving approval 3 months later.

He says some of the challenges he faced as a student in the Netherlands were the language (Dutch) and the weather! He stayed in Apeldoorn while studying.

His advice to current and prospective students is to manage their time well, practice self-motivation and work hard while staying focused. Doing a master's degree, and eventually his PhD, is “definitely on the table”.