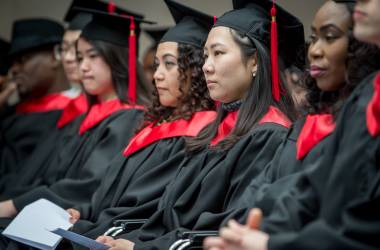 While Dutch universities continue to spend huge amounts of public funds on recruiting international students, any attempts by the government to curb their numbers will be futile, Wittenborg CEO Maggie Feng warned in an interview published in the November issue of Onderwijsblad, a publication of the AOb - the Netherlands’ biggest teachers' union.

The Ministry of Education recently announced a number of measurements to limit the number of international students in the Netherlands in the wake of outrage over the increase of English-taught programmes.

Yet, as Onderwijsblad points out, the recruitment of students is still going ahead unabated. Three-quarters of international students in Holland are thought to come from the EU.

The publication also takes a look at the conduct of agents used by universities to recruit students abroad. Last year the minister, Ingrid van Engelshoven, said she was not averse to asking the Dutch Inspectorate of Education to look into the methods employed by agencies if there are indications of irregular conduct.

Agencies are allegedly recruiting international students who do not qualify for admission to Dutch universities, offering them a costly “transition-year programme”, which is then taken care of by the agencies themselves. However, to comply with the requirements of a study permit, students are registered at partnering universities.

According to an article published earlier this year by Onderwijsblad, the agencies Study Group, OnCampus and Navitas are currently offering these transition programme students to five research universities and three universities of applied sciences in the Netherlands.

During question time in parliament, Van Engelshoven, said there was no record of how much exactly universities and universities of applied sciences spent on the recruitment of international students. However, a small survey by Onderwijsblad, has revealed that Radboud University has visited 50 education fairs in 20 countries this autumn including Canada, Vietnam and South Korea. The Hanze University of Applied Sciences attended 35 fairs in 16 different countries.

In contrast, Wittenborg spoke openly in the interview about their recruitment processes and costs. Almost half of the students at Wittenborg are recruited through commercial agents who charge about 10-12% of the study fees for each student admitted. In addition, Wittenborg staff attended several fairs the past year – from Russia to Ukraine, Turkey and London – paying between €1,800 - €2,500.

Feng told the publication that international student intake can be regulated through marketing, including those from other EU countries like Germany. There are an estimated 22,000 Germans currently studying in the Netherlands. “If I wanted to, I could bring hundreds of Chinese students to Apeldoorn, but we are not interested in big numbers and fast growth” Feng said. “For us it is about qualitative internationalisation.”